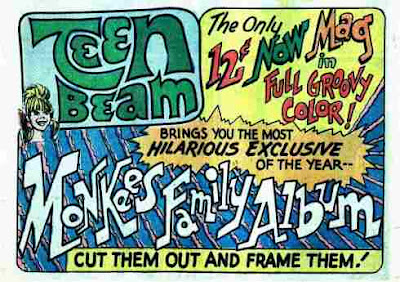 Here is an ad for DC Comics teen mag that was short-lived. The Monkees were popular in their magazine as they were in others back then.
Posted by Rick L. Phillips at 12:01 AM No comments:

If you are only familier with him as Ducky on NCIS then it may be a surprise to you that David McCallum was something of a sex symbol in the 1960's. He was the co-star of the spy drama "The Man From U.N.C.L.E." He played Russian agent Illya Kuryakin. He almost didn't get on the show. After the network viewed the pilot they asked that one actor be recast. The Network was referring to Mr. McCallum. The series creator and producer was thinking of recasting the agents boss Mr. Waverly and thought they ment him. So there was no arguement with the request. The executives were surprised to later see Mr. McCallum in the first show. When teenage girls became fans of the show as they were attracted to him the ratings went up and made the show a hit.
Years later,after the show left the air, the creator of the show met one of the network executives at a party. They finally talked about the mix up. The network executive said it was the best mistake that was ever made for the network. Below is an ad for a pin-up that was selling in comic books and magazines at that time. 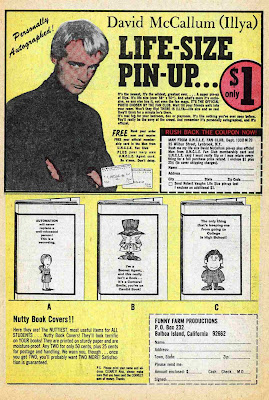 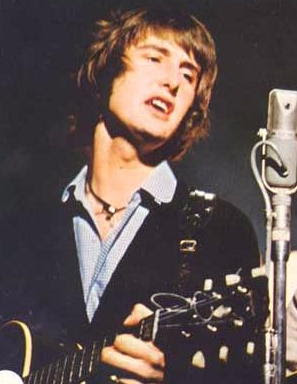 People who follow this blog know that I am a fan of broadcasting espically the early days. So it may come as a surprise that this posting isn't about Walter Cronkite. I want to express my sorrow to another icon. One of those from the music world of the 1960's Gordon Waller. He is more popular as Gordon from the duo of Peter and Gordon.
I can't believe that it was 3 years ago that I mentioned their reunion here. At that time they had renewed their battle against "A World Without Love." This past weekend the world lost one of it's musical soliders in that battle. On July 17th Mr. Waller died of cardiac arrest.
In the music world Mr. Waller's career seemed to be overshadowed by his friend and partner Peter Asher. Gordon looked like the high school Quarterback teaming up with the school nerd. It looked like Joe Montana joining with Bill Gates.
Gordon had the deep baritone voice that gave their songs the solid rock foundation that every group needs. Yet it was Peter who overshadowed Gordon with his connection to the Beatles. Peter's sister Jane was Paul McCartney's girlfirend. Thanks to that connection they had the songwriting talent of Lennon-McCartney behind them. With Paul's help they got a recording contract. Still no matter how big your connection is in the business you have to have talent to stay there and keep cranking out the hits. They had that talent and someone somewhere releases the Greatest Hits of Peter and Gordon for record buyers.
I am surprised that when they split up that Gordon didn't have a big career in country music. Yes I said country. Everytime I heard about any new releases that he had, it always seemed country flavored. His first solo album was a country album. For some reason he never became the big solo musical star. Yet Peter went behind the scenes and became famous as a producer and manager of stars like James Taylor, Linda Ronstadt and others. Even after their split Peter still seemed to overshadow Gordon.
Now Gordon had the bad luck to die the same weekend as Walter Cronkite. Overshadowed even in his death. I was recently over at Gordon's official site and heard part of his latest song "Rebel Rider." The last line I heard him sing was "You're gonna miss me when I'm gone." I never knew you Gordon but I do miss you.
Posted by Rick L. Phillips at 12:01 AM 1 comment:

If you miss Archie being in your local newspaper like I do then here is what todays installment is for this strip.
Posted by Rick L. Phillips at 10:11 AM No comments: