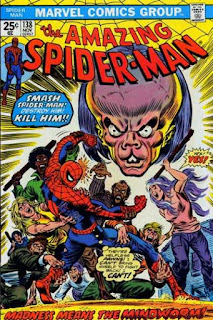 I’ve heard that most people say that it is their sense of smell that brings back memories to them. I can’t recall a time when smell did that for me. For me it has always been sight or hearing. Lately, I have been reading a lot of Marvel comics’ Essential series. Right now I’m reading Volume 7 of the Essential Spider-Man. The first story in this series is a reprint of #138. It was the very first comic book I bought when my family moved to the town where I still live. I recalled buying it at the local convenient store that was just a block and a half away from my new home. It was called Stop and Go. The store is still in that area and moved a half a block closer but I’m not in that house anymore. It’s also now called the Dairy Mart. I remember thinking how lucky I was to have a store that close sell comic books. You see, before we moved, the closest store that sold comics where I lived was at least a mile away. That lucky feeling didn’t last too long.   In less than 6 months they stopped selling comic books. A local drug store, that was about 5 blocks in the opposite direction and across the town’s main highway, was now my closest connection. It was still closer than a mile away, but it wasn’t like having them as your next door neighbor.   The good thing about the drug store is that I had to pass it on my way home from school. Sometimes I made a quick stop there to see what books were out.


It’s now rare to find any convenient stores or drug stores that sell comic books. Comic book specialty stores are now where most people have to find them.  If you are a comic book fan, and lucky enough to live a block away from your local comic book store, then cherish that feeling.
Posted by Rick L. Phillips at 9:33 AM No comments: