Time for the Saturday Morning cartoons with the Pink Panther.
Posted by Rick L. Phillips at 12:01 AM No comments:

This Day In Music History: Paul Anka and Diana 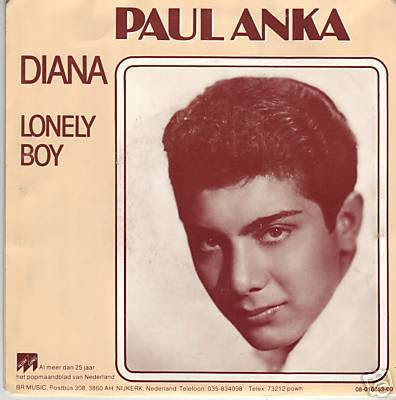 For years I had heard that Paul Anka wrote this song about his love for his babysitter. That is incorrect. He wrote it about the crush he had on his little brother and sister's babysitter. She was 3 years older then him and turned him down. He poured his feelings out in a poem and then set it to music.
This however was not the Canadian natives first song. In school he read a book called Prestor John by John Buchan. In the book was a town named Blau Wildebeeste Fontaine. He wrote a song about the town and named the song after it. Paul was a fan of the group the Cadets and noticed that their label was in nearby Culver City. He took his song to them and played it for them. They liked it and signed Paul to a record it and release it with the Cadets singing in the background. At the age of 14 Paul Anka released his first song. The song didn't sell well and he returned home to Ottawa.
The next summer he entered and won a contest sponsored by Campbell's Soup. The contest required you to send in the soup wrappers from their cans. Paul scoured every garbage can he found for soup wrappers. He even took a job at a supermarket to be close to soup cans that were thrown away. The prize that he won was a train trip to Manhattan.
WIth $100 from his Father Paul went to Manhattan. The first person he went to see was Don Costa at ABC-Paramount Records. He showed Mr. Costa his songs. He was so impressed with the song Diana that he told Paul to have his parents come to New York to sign contracts.
ABC-Paramount released the song and on this day in music history, September 9th 1957, Diana was #1 on the Billboard charts for 1 week. England liked the song even more then America. In England the song was #1 for 9 weeks in a row.
If you like picture sleeves like the one above you can see more at the The Picture Sleeve and Album Art Museum.
Posted by Rick L. Phillips at 12:01 AM No comments:

Well I reported earlier that the contest would end on Sept. 9th. the day is almost here. So far there have been no entries. If you still want to win either the Iron Man on DVD or on the Essential Defenders Vol. #4 just e-mail me the header and you win. Unless more then one enters at the last minute.
The specifics are that the header will have to be around 752 pixels wide and 215 pixels high. I am just guessing at the size right now but if you are the winner and there is a problem with the size I will let you know.
Posted by Rick L. Phillips at 7:03 PM No comments: 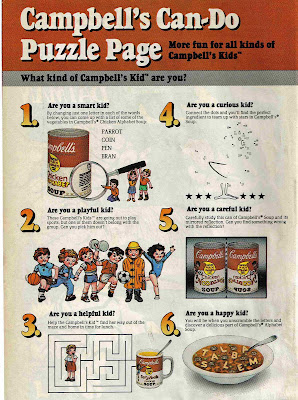 Here is a Campbell Soup ad and it has some puzzles that are always fun to solve. Come back tomorrow for the answers. Then come back the next day to see what Campbell's soup has to do with Paul Anka.
Posted by Rick L. Phillips at 12:01 AM No comments: