At present I am rewatching the Disney movie The Black Hole. An all star cast and the quality production values that Disney is known for. However, this was made in  1979 and only because of the success of Star Wars was why movies like this were getting made again. In 1969 sci-fi movies were made because of the moon landing. The cast, the script, which is kind of like 20,000 Leagues Under the Sea in space and 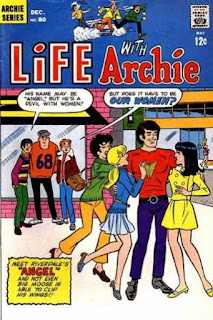 Well today a search that I have had for so many years then I can count came to an end. Thanks to my friend Keith Hammond I now once again have Life with Archie #80. I loved this story that I first read when I was about 7 years old. The story isn't exactly as I remembered it but as I know Archie comics did this story twice I may have mixed them up a little. First off the new character Angel looks better on the cover then he did in the actual story. He is getting all the attention of the girls. and even beats Moose in a fight after he flirts' with Midge. When Dilton tells Archie that he noticed something that could get Angel defeated, Archie fights him and it comes to a draw. The next time I saw this story Angel's secret to his defeat was that he had a low threshold for pain. So seeing that Dilton could knew that Angel had a tell sign on what punch he was going to use was a much better weakness. By the end of the story in this issue Archie won his respect and I was hoping he would become a new character that would be in the books for a long time to come. However, except for the retelling of the story in a book that I can't recall, this was his only appearance. When I informed Keith that I was looking for it he said he thought he could have it in a week or two. Two weeks later and it's now mine again. Thanks Keith.

Posted by Rick L. Phillips at 8:42 PM No comments: