Spider-Man and Hostess in The Champ 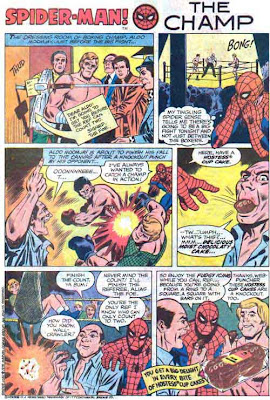 Where is this Monkees T-Shirt? 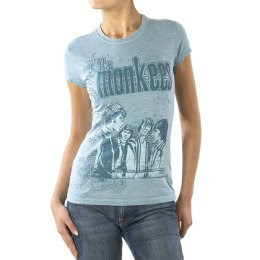 Does anyone reading this blog know where I can get this T-shirt. Target.com once had it but now they don't. I haven't found it on e-bay either. For some reason I didn't buy it when I saw it but now would like to have it. If you know where I can get it please let me know. Thanks from your site operator.
Posted by Rick L. Phillips at 3:01 AM No comments:

Here is your answer to Do You Know This Man? 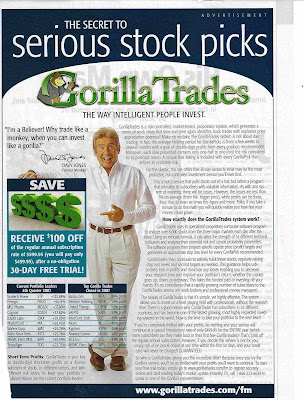 Yes it's Davy Jones! When a friend of mine showed me the ad I didn't know why and I hadn't had time to read the small endorsement. Then he said Davy doesn't look like he use to does he? That was how I found out who it was. I know they did it because of the Monkee/Gorilla connection but don't be surprised if Mike, Micky or Peter start to advertise for Charles Schwab.

Also Craig of Zablo's Zone was the only one to give the correct answer. Craig will get a years supply of Rice-A-Roni the San Franciso Treat, but only if he buys it himself every week for a year.
Posted by Rick L. Phillips at 3:01 AM No comments:

Do You Know This Man? 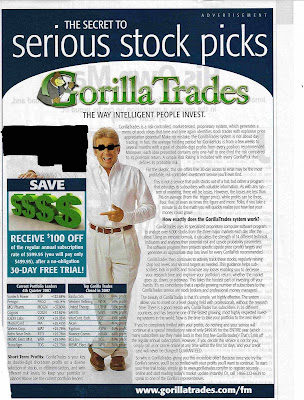 Here is a recent ad for Gorillatrades.com. Do you recognize the person doing the ad for them? You can come back here tomorrow to see if you have the right answer.
Posted by Rick L. Phillips at 3:01 AM 1 comment: 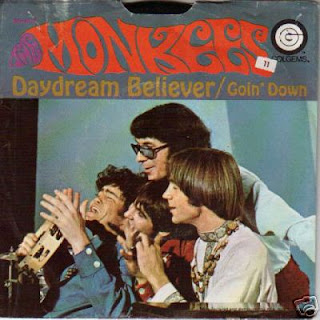 Kent of the Forgotten Hits mailing list, you can join his list if you e-mail him at The60sShop@aol.com, recently started a series about people's first 45's. Now I haven't contributed yet but this got me to think about what was my first 45. We had many around my house that were mostly bought by my Mom and Dad or Aunts and Uncles. Most of them I remember the tunes but not the names. Well come to think of it I do remember hearing "Purple Eater", "John and Marsha" and "The Witch Doctor" but the rest are now nameless melodies in my head. Others were Christmas songs or songs to teach children math and other scholastic lessons. Sometimes I would go to see my cousins who might be listening to Elvis or the Beatles but none of these were mine.
I saw other rock and roll acts on TV and heard them on the radio but never bothered to buy them or ask my parents for them. My biggest exposure to Rock and Roll music was seeing reruns of the Monkees on Saturday mornings. I recall in the opening how they would always sing "...we may be coming to your town." Now I lived out in the country and the nearest friend from my school lived to far to walk or ride a bike to see. So I was pretty much a loner in the summertime. I always hoped that the Monkees would come to my town and play with me. I was too young to understand that 4 men in their 2o's may not want to play all day with a little boy and if they did my house would be mobbed by any kid or teen who found out they were there. But I did have my dreams.
One Saturday I was with my Mom, Grandma, Aunt Joan and my little cousin Rachel in a second hand store. Shopping with females has always been boring to me and that day was no exception. As always I went to the toys or books. I wound up finding some used records and while looking at them I found the 45 single of the Monkees and Daydream Believer. At that time it was one of my favorite songs from their show. I asked my Mom if I could have it. I forget the price now but it wasn't much so she bought it for me. I could believe that I had my favorite Monkees tune and on the flip side one that I didn't remember hearing before. It is of course "Goin' Down." Once we got home Rachel and I had a lot of fun listening to it. We would dance to it and I am not ashamed to say that I did like dancing. Mostly I had fun listening to Micky on "Goin' Down" and trying to keep up as I sang along.

As I got closer to my teen years and almost ready for high school we moved from the country to a town a few miles away. We were in a newly built home with new furniture. One of those pieces of furniture was a console stereo system. You had to lift a heavy wooden top to have access to the turntable. Rachel and her family had also moved next door to us and we would play together. One day I got out the old 45 of Daydream Believer. It had been 3 or 4 years since my Mom bought it for me but we still loved to listen to it. After we were done I took the record off of the turntable and set it on the side next to the top. I carefully lowered the top of the stereo when I suddenly heard a cracking noise. I looked to see that the 45 was just barely hanging over the edge and the top put a small crack in the record. Unless I wanted to start farther in on the song the 45 wouldn't play again. It was a sad day to realize that I accidentally destroyed my favorite song and had to throw it away.

I have bought reissues and now have both songs on other Monkees collections that I got over the years. But the enjoyment I get from hearing them is nothing to the joy I felt when I listened to it as my first 45 record. The above photo isn't even from my collection it is from an e-bay auction that I think has now ended.
Posted by Rick L. Phillips at 3:01 AM No comments:

In a previous post I mentioned how I asked my wife to get me the classic game of Battling Tops. I got it and I have enjoyed it but felt a little foolish till I saw this video. Here is a game of Battling Tops as played recently but four grown men. Guess I'm not the only one with good feelings about this game. It made you feel happy even if you lost. How many games can people say that about.