This Day in Music History: The Steve Miller Band and The Joker 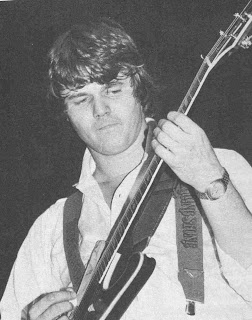 Actually I should have showcased this song yesterday as January 12, 1974 was its first day as the #1 song in the country on the Billboard charts. However, it was #1 for one week so this was its second day at #1 on this day in music history. Steve Miller was born on October 5, 1943 in Milwaukee, Wisconsin but was raised in Dallas, Texas. It was there that his love for music grew and he formed a band that included Boz Scaggs. Steve eventually left Dallas and traveled to other cities and formed new bands where ever he went. It was in San Francisco that he formed a band that became a local favorite. Boz Scaggs joined his new band and in a short while they were offered a contract with Capitol Records. The Steve Miller Band’s first two albums were Children of the Future and Sailor. Both are considered his best work but no hits were released off of the albums. The band was great and developed a loyal following but no one knew who Steve Miller was. He was dubbed the man without a face. As he said “People tended to be fans of the albums. Not Steve Miller.” In 1969 Scaggs left the group for a successful solo career. It was with the bands eighth album The Joker, that mainstream audiences found the group. Steve always wanted to have single hits and took up the challenge to have a hit. He said he always thought a hit song had to be two and a half minutes and have a soul-disco symphony. While the album went gold Miller said that he was uncertain of its commercial potential. He said that he asked a roomful of record executives what they thought as making and marketing hit records was their business. He said after listening to it one of them stood up and pointed to the record and said “That’s a hit.”
Posted by Rick L. Phillips at 7:42 AM No comments: 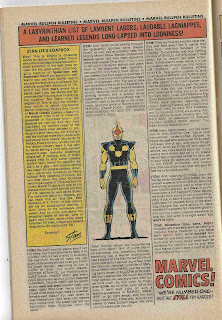 Here is a Marvel Bullpen Page from 1976. Notice the man in the yellow uniform. He is called Nova and we are told that Stan thinks we will dig him. I remember thinking that he didn't look so cool to me. Little did I realize that when Marv Wolfman's creation did appear he would become one of my favorite heroes. Sorry for the crooked scan but that is the way my scanner scans everything.
Posted by Rick L. Phillips at 9:48 AM No comments: 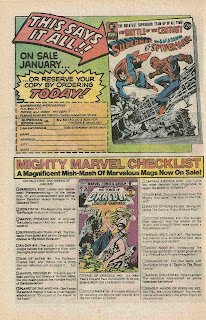 Here is a page from a Marvel comic book in 1976. It shows other Marvel comics that were on sale at that time in the Mighty Marvel checklist and on top it shows a book that made comic book history. The first ever meeting of Superman and Spider-man.
Posted by Rick L. Phillips at 4:14 PM No comments:

God will never stop working in our lives

"I can do everything with the help of Christ who gives me the strength I need. Philippians 4:13 NLT
Man is never so tall as when he kneels before God—never so great as when he humbles himself before God. And the man who kneels to God can stand up to anything. Louis H. Evans1 Isaiah 9:6-7 NLT"

"Like most folks, the apostle Paul had his share of financial ups and downs. He speaks openly of his experience in the last few paragraphs of his letter to the church at Philippi. His comments are wise and helpful for anyone facing hard times, fiscal or otherwise.

He acknowledges having "plenty" on certain occasions and "almost nothing" in the way of financial resources at other times (Philippians 4:12). But notice that even in his bleakest moments, when his stomach was literally empty and growling, Paul's spirit was full (v. 11). Paul experienced genuine contentment in difficult times. How did he do this?

Paul relied on the strength of Christ to get him through. The verb translated "gives me…strength" means to infuse needed power into our souls. God's strength is a persevering kind of divine energy that can sustain you through economic difficulties or troubles of any kind.

Praying God's Promise:
I need help, Lord, and you have promised to infuse me with your infinite power. Without divine assistance I cannot press on. With your help and strength, I can do whatever you ask of me. Give me a second wind. I look to you in trust because I know you are faithful.2

This Day in Music History: Whitney Houston and So Emotional 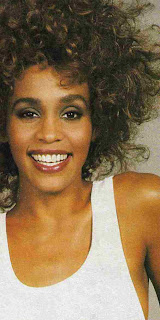 Well we have talked about the #1 hits of many songs of the 50’s, 60’s and 70’s so today lets talk about one from the 80’s. On January 9, 1988 a song written by Billy Steinberg and Tom Kelly reached #1 on the Billboard charts for Whitney Houston. That song was So Emotional. Clive Davis, the president of Arista, Whitney’s record label, called and told them that he needed an uptempo song for her new album.
Steinberg and Kelly started to write the song but tried to not have Whitney in mind while they wrote it and produced their demo. Mr. Kelly said that “Whenever we try to write a song for somebody, we usually end up writing something stupid and contrived, so it’s best we just write.” The song they ended up with they titled Emotional. Kelly said the song when they were done with it actually sounded more like a song Prince would have written and produced.
They sent the song to Clive Davis. He gave them a fast response letting them know that he liked the song. Mr. Kelly said that Clive Davis gets in touch with you immediately to let you know if he likes a song or not. He usually will call or write a note the very day he hears the song. He says he is direct and lets you know if he liked it or not and if he doesn’t like it you don’t feel insulted.
Ten songs for the album were already recorded when Mr. Davis got the song to Whitney’s producer Narada Michael Walden. By the time Mr. Walden received the song it had been retitled So Emotional. Whitney was scheduled that day to come in to record minor changes to some of those songs. Before they recorded the changes he had her record So Emotional. She recorded 90% of the song in one session. So Emotional was the last song recorded for the Whitney album.
When Mr. Davis heard the song he loved it. It wasn’t that way for Mr. Steinberg and Mr. Kelly. You see Mr. Walden slowed the song down a bit. Mr. Kelly said it was hard for them to get use to. He said that he kept calling Mr. Davis telling him “You really ought to speed it up. Now we love it.”
Posted by Rick L. Phillips at 3:01 AM No comments:

This Day in Music History: Marilyn McCoo and Billy Davis Jr. and You Don't Have to Be a Star (To Be in My Show) 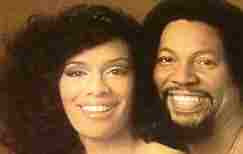 In 1975 the husband and wife team of Marilyn McCoo and Billy Davis Jr. made a hard decision when they decided to leave the successful group of the Fifth Dimension to start solo careers. The original plan was for them to have seperate careers. But suddenly Billy decided they should have their first album be together and the songs would all be duets. Producer Don Davis had a song, You Don't Have to Be a Star (To Be in My Show), that he thought would be perfect for them. It wasn't written as a duet but was rearranged for them. Getting top musicans Davis was able to produce a song that sounded like a fresh new record from Motown but it was really on ABC records. However, it was not the first song released from the album. The first was called I Hope We Get to Love on Time. It only reached #91 on the Billboard charts.
It was their second one that reached #1 on the charts on this day in music history, January 8, 1977 for one week. It was a huge cross over hit and won a Grammy as Best Vocal R & B Vocal Preformance by a Duo, Group or Chorus. Their success on the charts led them to have a summer variety TV series for 6 weeks in 1977. Later, Marilyn was host of the TV show Solid Gold. She later signed as a solo artist with RCA and released several songs solo and with Billy but none of them reached the top 100 on the charts.
Posted by Rick L. Phillips at 3:05 AM No comments:

The Prestige on DVD

Fans of Hugh Jackman, Christian Bale and Michael Cane may be interested to know that the movie The Prestige will be released on DVD on February 20th. Click here to pre-order the Prestige.

God is merciful: Can you ever be beyond God's mercy?

Surely your goodness and unfailing love will pursue me all the days of my life.
Psalm 23:6 NLT
From poolroom to pulpit
By the age of thirteen, Johnny Hunt was already heavily abusing alcohol. His mother worked two jobs to provide for her family, and Johnny capitalized on the lack of adult supervision by getting into all kinds of trouble. When he was fourteen, he found a fake ID and gained entrance to the local poolroom, where he began playing pool five to eight hours a day. Johnny dropped out of school at sixteen and was hired as the manager of the poolroom.
When he married, his wife, Jan, soon began to talk about going to church, but that was not part of his plan. Then a man named Mr. Pridgen began coming into the hardware store where Johnny had taken a part-time job. As Mr. Pridgen paid for his purchases each week, he would tell Johnny how Jesus had changed yet another life and invite him to church. He finally gave in.
After a few weeks Johnny was surprised to feel the Lord working in his heart. Each week, during the invitation hymn, he began to weep. During the morning service of January 7, 1973, Jan noticed his tears. At the evening service that night, Johnny went forward and put his trust in Jesus.
From that moment on, Johnny Hunt was a changed young man. He went to all his old hangouts, sharing with his old friends what Jesus had done for him. When a skeptic asked him, "What are you going to do now that you're saved and going to heaven?" His answer came easily, "Take as many people with me as I can." To achieve that goal, Johnny decided to finish school and become a pastor.
from The One Year® Book of Christian History by E. Michael and Sharon Ruten, Tyndale House Publishers (2003) pp 14-15
Posted by Rick L. Phillips at 3:01 AM No comments: