I don't know where they keep finding these old TV commercials but I am loving it. Here is one I nearly forgot about. It's from the 70's but it was influenced by the 60's as you can see when you click on the video.
Posted by Rick L. Phillips at 2:51 PM 1 comment: 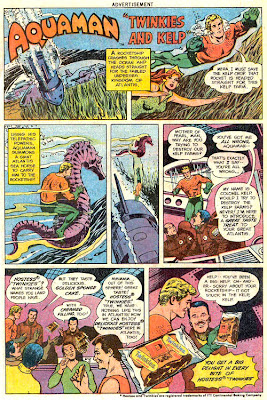 My friend Rob is celebrating one year as a blogger over at Aquaman Shrine today. In honor of the celebration I am showing today how the snack Twinkies came to the city of Atlantis. Congratulations Rob and here is to another good year for Aquaman.
Posted by Rick L. Phillips at 3:01 AM 1 comment:

Don't look for anything on my blogs for the next few days. I am hahaving computer trouble and won't post till it is fixed. Just an FYI.
Rick
Posted by Rick L. Phillips at 7:17 AM No comments: 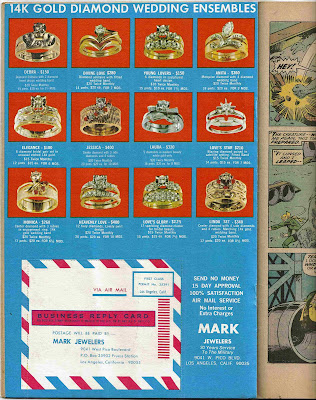 I have seen some crazy ads in comic books during my time as fan and reader of them. However, an award needs to go to someone for this ad. I saw this in an issue of Marvel Team-Up that I was reviewing for my other site Mail It To Team Up. Who had the idea to try and sell jewelry to kids who were doing chores around the house to have enough quarters to buy all their favorite comic books that week? Was it the sales people for Marvel? If so they deserve the award for being the best salesperson for selling the idea to Mark Jewelers. I can't imagine Mark Jewlers in 1974 saying "Hey we sell diamond rings worth $200 to $400 dollars. So why not place an ad in comic books and sell them to children?" Also giving them a 15 day approval and telling them they didn't need to send money. Sounds like it could be a disaster.
The only thing I can think that would have made sense was that an older college crowd was now reading comics and even having Stan Lee lecture at those schools. Perhaps they hoped they would want to buy them for their girlfriends or boyfriends at that time. This was not a one page ad it was four pages on cardstock paper and stapled into the center of the book. So the ad stands out like a sore thumb. I hope it worked for them but since I never saw the ad again I kind of doubt it.
Posted by Rick L. Phillips at 5:31 AM 4 comments:

I love finding old commercials on YouTube.com. Here is one that I remember from 1966. Gad what a memory! It was the new version of Paul Revere for the 60's.


I use to think that seeing Kool Aid Man crash through a fence or a wall just to bring kids a drink was funny. It still is to me. This commercial is unique as the singing Kool Aid Man goes into a falsetto to hit the high notes. My friend Jeff said when he heard that he thought "The Bee Gees have created a monster." He was right too. For awhile everyone seemed to be trying to sing in falsetto to sound like them. Just leave that type of music to Brian Wilson, Frankie Valli and the Bee Gees and sometimes Dean of Jan and Dean. Otherwise most men don't sound that good singing that high.
Posted by Rick L. Phillips at 3:01 AM No comments:


I had not seen this commercial in years. When I did see it again it reminded me of my childhood. When summer meant going to fun places that even a kid could afford and drinking your favorite soft drink. In this case it is Orange Crush.
Posted by Rick L. Phillips at 3:01 AM No comments: