Thor and Hostess Meet A Glutton For Gold 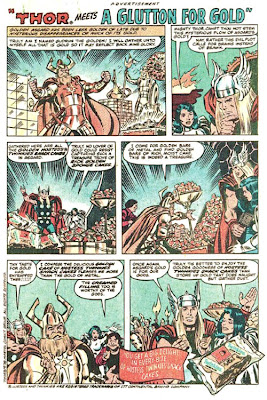 Another Saturday morning and I ain't got no Twinkies but Thor does. Let's see how he beats this weeks villain.
Posted by Rick L. Phillips at 3:01 AM No comments: 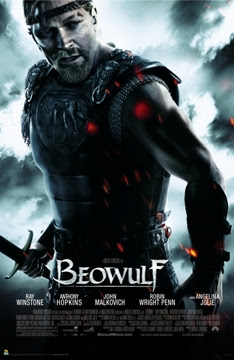 I had the day off work today and wanted to see a movie. There were only two movies that seemed appealing to me. To help get more into the Christmas spirit I thought of seeing Fred Claus. However, I saw that Beowulf was showing in 3-D. I decided on that one as what are the chances I will see a 3-D movie again. I remembered when I was in college and going with my friends and cousins to see 3-D movies when the craze came back around then. Instead of seeing the 12:30pm show of Fred Claus I left my house at 1pm to run a quick errand and then stop at the theater to see the 1:30pm showing of Beowulf in 3-D.
At 1:25pm I entered the theater. I asked to purchase one ticket to Beowulf. I was instantly shocked when the man behind the counter said the price was $9. 45 as he rang up his sale and slid the 3-D glasses to me. I knew the price of movies had gone up but when I saw Mr. Bean's Holiday it was only $6.25. I told the man I only asked for 1 ticket. He said yes but it is in 3-D so they charged more for it and that was the price for Beowulf. I slid the glasses back to him. I told him I know it is in 3-D but I won't pay that much for a movie. He seemed shocked by this. I looked to see when the next showing of Fred Claus was playing. Not until 4pm. So I left the theater. I drove to another movie theater but they didn't have it in 3-D and to me it isn't worth seeing unless it is in 3-D. The person at that theater said it would cost extra if it was in 3-D to pay for the glasses. So I went home.
Now I know that I sound like some old guy just ranting. However, I didn't see any ad that said it was going to cost around $3 more. Since my memory of seeing the older movies in 3-D was that the glasses were free I didn't expect to pay more for the film. Besides when is it that you could use those glasses again? They aren't coming out with 3-D movies that often. If they were they would probably design them in such a way that you had to buy the glasses every time you went to the movies.
Had I seen an ad telling of the extra price I would have been prepared or not wasted my time driving to the theater. To be honest the only ad I saw for the 3-D movie is when it was on the theater marquee as I drove past it yesterday.
Anyway if you plan to see it this weekend in 3-D be aware that it may cost you $3 more.
Posted by Rick L. Phillips at 7:30 PM 2 comments:

I don't know who made this but it has to be one of the best homemade Christmas music videos I have ever seen. Children visiting Santa set to the Paul McCartney and Wings song Wonderful Christmas.

A Submarine to Adventure 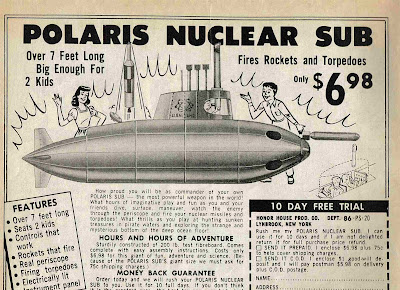 How many of us saw this half page ad in our comic books while growing up? I use to dream of getting this two man sub and going with one of my cousins Randy, Rachel, Jeff or Steve and using it to travel to someplace like England. If for some reason we couldn't go that far then we could at least explore the bottom of the lake that was across the street from where I lived back then. None of that ever happened as I never got the sub.
As I got older I saw this ad in some old comics and realized how naive I was. It was probably a cardboard box made to look like a sub and your imagination would take you across the sea or to the bottom of your local lake. I am glad I never asked my parents to buy it as I would have been very disappointed.
Posted by Rick L. Phillips at 8:51 AM No comments: 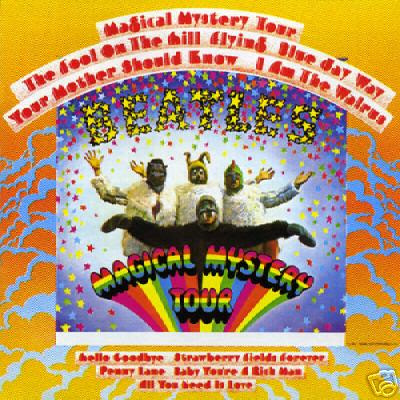 On this day in pop culture history,Nov. 27 1967, The Beatles released their album Magical Mystery Tour in the US. Today is its 40th anniversary. It was also the name of a TV special that aired first in England. It aired in black and white so that didn't help with how the special was perceived. It also had a terrible plot. It was just the Beatles on a bus tour and the rest of the story was made up as they went along.
The reaction to the special was so bad in England that ABC canceled plans to show it in America.
The movie wasn't shown in the USA till 1976 when it showed up in art house theaters at midnight showings and on college campuses. The music was great. The songs from the soundtrack are still heard on radio today but it is hard to find a place where you can see the movie. If you want a taste of what the movie was like you can view the opening to it below. 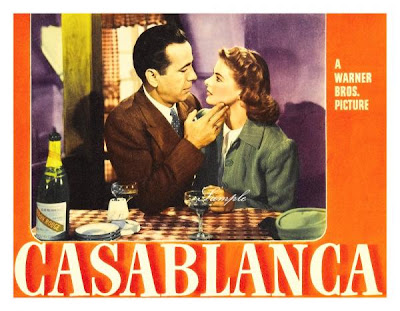 The romantic movie that even guys like. Casablanca, opened on Nov. 26, 1942 at the Hollywood Theater in New York. Every guy since then has taken or rented this movie for their dates to show they have a sensitive side. Below is the movie trailer to this wonderful film.