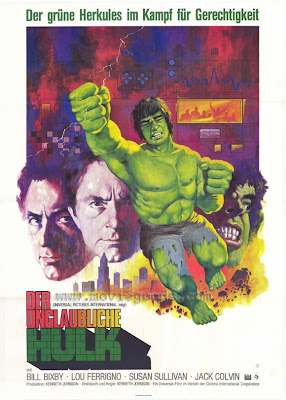 I was searching for something else when I came across this on the net. It seems to be a German movie poster of the Bill Bixby TV pilot film of the Hulk.
Posted by Rick L. Phillips at 12:01 AM No comments: 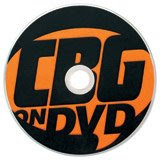 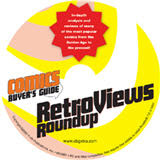 The Comic Buyer's Guide is now on DVD. At least 2 years worth of reading of one of your favorite hobbies has now entered the 21st century. Nothing wrong with still publishing it the old way and actually having it in your hands to read but this way is cheaper. According to them this is $140 worth of content for $24.95. You can order CBG on DVD if you click here.
Also from CBG you can get Retroviews Roundup. For $19.95 you get more then 2,000 reviews on past comics. A complete run of Amazing Spider-Man up to #538 and Dell, DC and Marvel complete run of Tarzan. Also, reviews from respected CBG writers including Craig "Mr. Silver Age" Shutt, Jim Johnson, Michelle Nolan, and Brent Frankenhoff. Order Retroview Round up by clicking here.
Posted by Rick L. Phillips at 6:05 AM No comments:

The Monkees and the Head Soundtrack 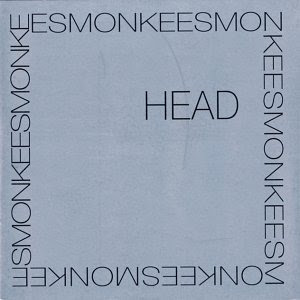 It was a little over a month ago that I told what other songs on the first five of the Monkees albums should have been released as singles. Each of those songs could have been major hits for the Monkees. That trend of not releasing good solid material for them as singles continued for them on the rest of the albums released until 1970. Actually by this time the Monkees were viewed as teenybopper music and even if the greatest song of all time had been produced by them it still may have flopped. Still they did the best with what they had.
Let's start with Head. This was the soundtrack to the only major film that the Monkees created. As 1960's movies and rock operas go it wasn't as bad as most remember. This is not to talk about the movie but the soundtrack. The soundtrack was very good. The dialogue of the actors in the movie between songs should be forgotten. You would have to see the movie to understand what they are talking about. The major song release from the album was the Porpoise Song and some DJ's and fans got it and knew they guys were trying to mature their musical productions.
Can You Dig It should have been a single. It was written by Peter Tork and is on the CD twice. Once with Micky as lead and the other with Peter. Either one could have done well on the charts but I prefer Micky's version.
The Carole King/Toni Stern penned song As We Go Along is beautiful and should have been an A side on a 45. It was released as the B side of the Porpoise Song which Carole King also co-wrote. The Porpoise Song was played on radio and if those DJ's had just flipped it over As We Go Along may have charted higher then the real A side.
Long Title: Do I Have To Do This All Over Again was the closing theme to the film and it was also written by Peter who sang lead. He did a great job and this should have been his first A side 45 with him as the solo lead. I think the song would have done well and perhaps Peter would have stayed long with the group seeing that his efforts were appreciated.
Now I haven't mentioned Circle Sky by Mike Nesmith. The reason for that is while I like the song I don't think it had what radio listeners were looking for back then. I don't think it would have done well on the charts but I could be wrong.
Sometime later I plan to have a posting about the other lesser known albums of the Monkees.
Posted by Rick L. Phillips at 12:01 AM No comments: