The Adventures of Superman Network Promo

Here is a rare Network promo for The Adventures of Superman. I am sure that this would have made many 10 year old boys in the 1950's eagerly wait till the latest episode. However, viewing this from the 21st century it almost comes off as comical. Still it does make one from that era wish for a more simple time when you always knew good would win over evil on television.


Booksteve knows I am a big fan of the old Rocket Robin Hood series. He sent me an e-mail that directed me to this video introduction of the series. It was nice to see the animation again but I wonder if there were two openings as this is not the one that I recall. The one I remember ended with them singing "Hooray for Rocket Robin Hood." This one does not end that way and the song is completely different. Anyway it was a nice gesture and nice to see the merry men again.
Posted by Rick L. Phillips at 6:55 PM No comments:

The Amazing Adventures of Super Ads 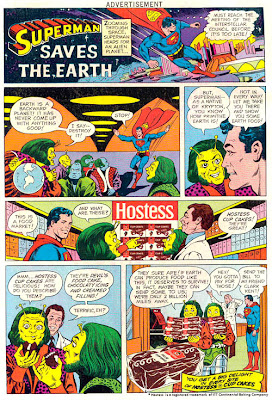 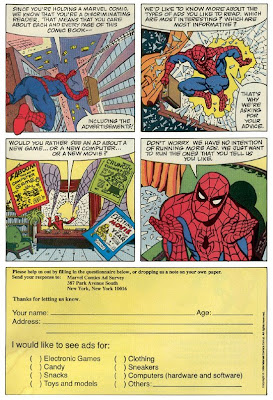 There have been many ads over the years in comic books. They have ranged from conservative to just plain weird. Everyones favorite weird (or at least close to weird) ads have been the Hostess ads like the one with Superman that you see above. I love Hostess cupcakes but I never thought they had such a powerful taste that it could save the world. If you notice in that last panel Superman tells the store manager to send the bill to Clark Kent. He has done this in hie regular comic book adventures as well as his old TV show "The Adventures of Superman." Didn't anyone ever wonder why Clark was nice enough to pay for all the damage that Superman caused? You can't be too bright if you live in a comic book type world.
The second ad I don't recall seeing before but it still seems vaguely familier. Spider-man is asking Marvel comic book readers what Ads they like to see in their comic books. Marvel must have been doing awfully well at the time. I don't know of any company that would turn down anyone willing to pay money to advertise on their product. Unless it was for some moral reason. The Spider-Man ad I noticed Invincible Super-Blog.

Posted by Rick L. Phillips at 7:54 AM No comments:

This Day in Music History: B.J. Thomas and (Hey Won't You Play) Another Somebody Done Somebody Wrong Song 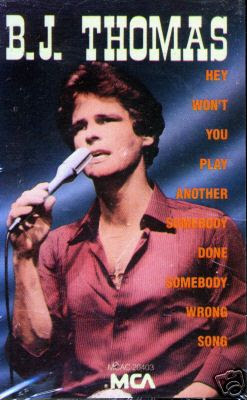 On this day in music histroy, April 26, 1975, B. J. Thomas had the #1 hit in the country with (Hey Won't You Play) Another Somebody Done Somebody Wrong Song. It is the second longest titled song to have hold the #1 position on the Billboard Charts. The longest titled song belongs to the Stars On 45. It was a record that had people singing a medley of older songs and it had every song that was part of the medley in the title. The title is too long for me to put in here now but when I showcase that song I will have to use the entire title.
B.J.'s song was written by Chips Moman and Larry Butler. Mr. Moman said that there was no inspiration for the song. It was not written about anyone who did either of them wrong. Also, it was not written with B.J. in mind. They had no certain singer in mind. The only reason Mr. Thomas recorded it was because he was offered the song first.
According to his autobiograpy, Home Where I Belong, Mr. Thomas doesn't even remember the recording sessions. In the book he admits that he was heavily addicted to drugs and his lack of memory is probably due to that. He was spending upwards of $3,000 a week on his habit. He says "It's a wonder I'm still alive considering how many times my bodily functions quit and someone had to revive me."
His marriage to his wife Gloria was nearly dissolved when he went to see her and his daugther in Texas. During their seperation Gloria became a Christian after becoming friends with two missionaries who lived nearby. In his book B.J. tells how he became saved on January 28, 1976. B.J. had hit rock bottom and Gloria took him to her friends Jim and Micah Reeves. After talking with them B.J. privately prayed for 20 minutes and gave his life to Christ at midnight. When he was done he looked up at the clock and he said "the memory of seeing that secondhand sweep by the 12 will never leave me."
His life became drug free. He started recording Gospel albums and won four grammys for his Gospel music. Becoming a born again Christian failed to get him secular work but he did release secular albums in 1983 and 1984 with the release of the albums New Looks and The Great American Dream.
Posted by Rick L. Phillips at 3:01 AM No comments:

I know I said I was only going to be blogging once a week but I may do more from time to time and when I heard about this I had to tell you. I really can't believe this has happened. I just found out that on April 18th, only a few days after we heard of Johnny Hart's death, his co-creator on the Wizard of ID, Brant Parker, also died. Brant I found out was ten years older then Johnny and he discovered him when he judged some artist at Johnny's high school. He was so impressed with his art that he arranged a meeting and later they created the Wizard of ID. Hart wrote the strip and Brant did the art. A few years ago Brant retired and gave the strip to his son who continued the strip with Mr. Hart till his death. I tried to find strips that were in tribute to Mr. Parker but only found this one. If there are others please let me know. The above strip is by Brant Parker's son.
Posted by Rick L. Phillips at 12:40 PM No comments: