This Day in Music History: Connie Francis and Don't Break the Heart That Loves You 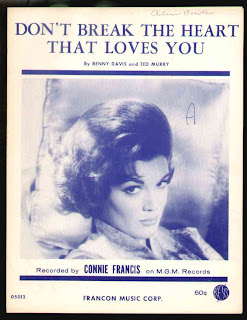 Singer and actress Connie Francis had the #1 hit in the country on this day in music history on March 31, 1962 with the song "Don't Break the Heart That Loves You." Connie had her first #1 hit with "Who's Sorry Now" which was written in 1923. It was her Father who advised her to record the song. So when he thought "Don't Break the Heart That Loves You" would be a hit Connie took his advice and recorded it. It was the third #1 hit of her singing career.
When looking back on her acting career she said her acting was amateurish and would never replace her singing career. She kept a notebook of her bad reviews because she thought they were hilarious. Her films were Where the Boys Are, Follow the Boys, Looking for Love, and When the Boys Meet the Girls. Connie was the sex symbol of her day. When the movie Where the Boys Are was remade in 1984 she was asked to be in the film but she didn't like the script and declined. She has suffered many set backs in her personal and professional life but has always bounced back. Connie Francis is a true survivor.
You can click on the video below to hear a few clips of her songs. None of them in the video are the featured song. If you want to hear a clip of the song you can if you click here.

Posted by Rick L. Phillips at 3:36 AM No comments:

These videos reminded me of a show that was televisions attempt to bring the Bill Murray type of Ghostbusters to prime-time tv. I guess they couldn't get the rights to bring the movie version to TV so they created a cheap knock-off but I really liked it when I saw it. It starred Trevor Eve, Dennis Dugan and Nina Foch. If I remember correctly Trevor Eve was a college professor who on the side was a ghost buster. Nina Foch was his boss and he was relucently teamed up with Dennis Dugan who was a writer for a National Enquirer type of newspaper. Each week they went to prove that a place that was haunted by a fake ghost or demon but would sometimes find out that it was real. The series didn't last long and it was co-produced by Brian Grazer who later helped Ron Howard produce blockbuster movies and television series.
So here are two videos. One is a short commercial for the series and the second is the series opening.

We Will Rock You by Britney Spears, Pink and Beyonce

Here is Pepsi Commercial with Britney, Pink and Beyonce as warriors singing We Will Rock You.

If anything it proves that Pink and Beyonce can sing. Britney sing/talks.

Posted by Rick L. Phillips at 3:03 AM No comments:


Here was a pretty good Star Wars PSA aboiut drunk driving.
Posted by Rick L. Phillips at 3:02 AM No comments:


Anyone remember this show from the early days of UPN? Christopher Lloyd was the bad guy and he came to life from a video game. The creator of the game had to hunt all the villains down and put them back into the game. He always had to use his ex-girlfriend as bait because the damsel in distress in the game was designed after her and the villains were progamed to go after her or him as he designed the hero of the game on himself.
Posted by Rick L. Phillips at 3:01 AM No comments:

I just heard that one of my favorite artist passed away a few days ago. I know to some it is old news but it makes me sad to hear that Marshall Rogers has died. He was one of the first artist whose style I recoginzed by just glancing at it. I met him at a convention in Cincinnati and got him to autograph issue 479 of Detective comics. For some reason comic and science fiction conventions are not heavily promoted in Cincinnati so the line was not long for Mr. Rogers but it was the longest line there. I happily waited for him. His apperance there was unannounced so I had to buy the Detective comics there as I didn't know I should have brought one of his issues to sign. We had a small conversation but I don't remember what was said. He will be missed. The above photo I got from this Marshall Rogers fan site.
Posted by Rick L. Phillips at 7:22 AM No comments:

I remember this ad from when I first saw in on the Super Bowl. It was also the first time I remember seeing Cindy Crawford.

Posted by Rick L. Phillips at 5:42 AM No comments:


This 1967 promo from ABC is hosted by their then top stars Batman and Robin. The networks used to do this in late summer or early fall for their network and Saturday morning lineups. The two I have the best memories of are this one and a Staurday morning one that was hosted by the kids of the Brady Bunch. Their own cartoon show was starting that season.
Here is the prime time promo for the ABC line up for 1967. A special guest shows up at the time. A big star getting his own variety show again. He is told how long his contract is but saddly the show was canceled long before the contract ended. Batman one year later would also be canceled. Fame is fleeting.
Posted by Rick L. Phillips at 3:02 AM No comments:

Remember this Old Spice commercial. I think the sailor in the ad is the Father of Matthew Perry.

I was hoping that someone could tell me why in the 1960's did DC comics put Go Go Checks on the top of their comic books? I can't seem to find the answer on the internet and was hoping anyone who reads this posting would know. Thanks!
Posted by Rick L. Phillips at 8:22 AM 1 comment:

Well I have just finished the Showcase presents Aquaman and I am half way through the Green Lantern vol. 1. To my surprise I prefer Aquaman to GL. The writers of Aquaman had him behave like a King that he was and he treated everyone the same and fairly. It was amazing to see how they thought up ways to have him use all the fish in the oceans to help fight crime on the high seas. Green Lantern on the other hand sometimes behaved like a jerk and was over confident. I know the times back then were not pc but most people back then I don't think would like to have been called Pieface like Hal Jordan did with his best friend. The way he behaved with his boss carol bordered on sexual harrassment. Carol was a bit of a flake too. First she is attracted to test pilot Hal Jordan. Then she drops him in favor of GL not knowing that he is really Hal. Later when a scientist seems even more powerful she thinks she is in love with him. When it turns out that he is the villain and GL captures him she decides that GL is her true love. It is plain to see that this early Carol Farris was attracted to men of power. She loves power more then having a real true love for any man. Till she realized that she had one thought in this book that I agreed with. She thought that maybe she had a "filghty mind." I doubt I will buy vol.2 of Green Lantern but I can't wait to read Vol.2 of Aquaman.
Posted by Rick L. Phillips at 3:02 AM No comments: