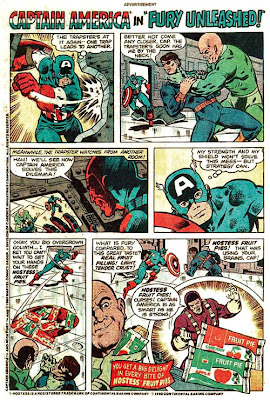 Ok I have not put my request for prayers for my friend Beth at the top. I will put updates here as I know them for those that are praying for her. If you wish to read what I have written about her you can scroll below. Till then I hope you enjoy this old Hotess ad.
Posted by Rick L. Phillips at 9:02 PM No comments:

Back in December of 2005 I asked that readers of this blog pray for my old high school friend Beth Donovan as she was dying of cancer. Prayer worked that time as Beth lived longer then the Dr. said and beat the odds. That time is over as I recently heard that the cancer has come back. They only give her 6 months. Please pray that Beth beats the odds again. She needs all the prayers she can get. I will keep this at the top of the blog at all times so please scroll down if you wish to see if there is anything new. 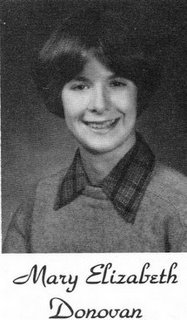 Not long ago I asked anyone reading this site to pray for an old high school friend who has cancer, Beth Donovan. I am asking that you continue with those prayers. Beth is someone who, at least to me, stood for all the good things of high school. You may have had to go to my school to understand. Our class was very cliqueish. If you weren't in their group some kids wouldn't have anything to do with you. I was not that way and, as I told my wife, neither was Beth. She was friendly and outgoing. She always had a smile for everyone. Beth never said anything bad about anyone that I know of. I remember going to her house with others from a school club to work on a club project and having alot of fun. Beth was one of our senior class officers, a straight A student and elected most versatile. Basically Beth was a nice, smart and friendly person. I never heard her use bad language or any rumors about her doing anything bad.Recently I did hear that she was fighting cancer. Now I have heard that she has given up and has come home to die. Pray that she continues to fight and God keeps her with us. With the world in the shape it is in today, we need more people like Beth Donovan. Beth if you are reading this I want you to know that my wife, myself and alot of other people are praying for you. 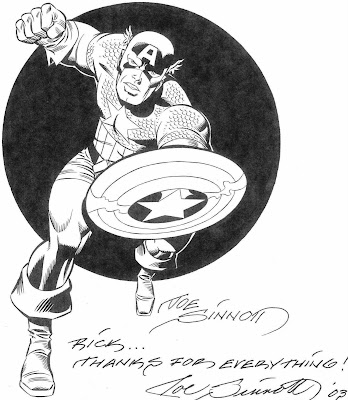 A couple of years ago I wrote to Mr. Joe Sinnott when I found his address and I told him how much I have enjoyed his art work. It was just a nice letter to let one of my favorite artist know the joy that he brought to me. I never expected to hear from him. However a few weeks later I got this drawing of Captain America signed by Mr. Sinnott himself. I didn't ask for it he just sent it out of the goodness of his heart and his way to say thank you. He is very perceptive as my three favorite Marvel heroes are Spider-Man, Nova and Captain America. I didn't tell him this in the letter and still he sent me one of my favorites. I treasure this piece of art very much but I have never been able to find the right frame for it. One day I will. Just thought I would share this with you all and publicly thank him here on my site. He has his own site and you can go to it at Joesinnott.com
Posted by Rick L. Phillips at 8:46 PM No comments:

Here is a video of Hermans Hermit's on the Danny Kaye Show. The quality isn't very good but it is nice to see. The disco dancer in the middle looks like he's going to hurt himself. In his introduction of Peter Noone and the group Danny shows, with the expression on his face, that he doesn't seem to care for the pop rock music. I found that odd from a man known for his musical talent ranging from classical to jazz. In the interview he seems quite fond of Peter but I wish they would have talked to the other Hermits. I always thought they got the short end of the stick in terms of popularity. Still Peter is quite a likable chap and a good actor and singer.

This Day in Music History: Herman's Hermits and Mrs. Brown You've Got a Lovely Daughter

On this day in music history, May 1, 1965, the #1 song in the country was Mrs. Brown You’ve Got a Lovely Daughter by Herman’s Hermits. This was the third song in a row to reach #1 on the Billboard charts from a group from Manchester, England. The ones that preceded it were Freddie and the Dreamers with I’m Telling You Now at #1 from April 10, 1965 to April 23 and Wayne Fontana and the Mindbenders with Game of Love from April 24, 1965 to April 30, 1965.
Herman’s Hermits was a huge success on both sides of the ocean. There lead singe was Peter Noone who was born on November 5, 1947 in Liverpool. He attended the Manchester school of Music and studied music and drama. It was here that he was discovered and found work as an actor. He was cast in roles and TV shows Knight Errant and Coronation Street. He started playing music with a Manchester band called the Heartbeats. Producer Mickie Most signed the group to a contract and produced all of their hits. They changed their name to Herman and the Hermits and later to Herman’s Hermits.
The roster of the group changed and the members of the group when this song reached #1 were Derek Leckenby, Peter Noone, Keith Hopwood, Karl Green and Barry Whitwam. Eventually most of the studio music was only recorded by Mr. Noone and studio musicians. The real group only played the songs when on tour.
In 1965 they had 3 songs in the top 30 for 6 weeks. It wasn’t planned that way. As the song Can’t You Hear My Heartbeat was moving down the chart MGM records released the song Silhouettes. Radio stations played it but they also played the album cut Mrs. Brown You’ve Got a Lovely Daughter and were getting a bigger response. It forced MGM to release that song as a single as well. Anticipation for the record was so high that it entered the charts at #12. The highest chart entry of any record. The group and the song were so popular they starred in a movie with the same name.
Their first song was a remake of the Goffin and King his I’m Into Something Good. It was the only #1 song for the group in England and the only #1 hit for Goffin and King in England.
Posted by Rick L. Phillips at 9:48 AM No comments: 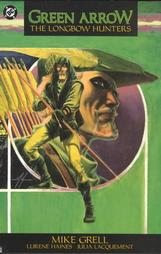 I was searching internet for info on Black Lightning to see if there was anything I would want to pu on my other site Black Lightning Limited. What I found was there is a possible interest in Green Arrow the Movie. Apparently it would revolve around Green Arrow going to prison for a crime he didn't commit and he has to use the help of various DC villains to break out and prove himself innocent. It sounded like a good idea to me at first but then I read somewhere that he really is only Green Arrow in the first few minutes of the film. I don't think it will be much fun to see him as Oliver Queen breaking out of jail. With out the costume and the bow and arrows all you have is "Prison Break: the Movie." If it is made then it may star Matt Damon as I have read there is a rumor that he has signed to star in Green Arrow the Movie.
Posted by Rick L. Phillips at 3:01 AM No comments:

This Day in Music History: Elvis Presley and Heartbreak Hotel 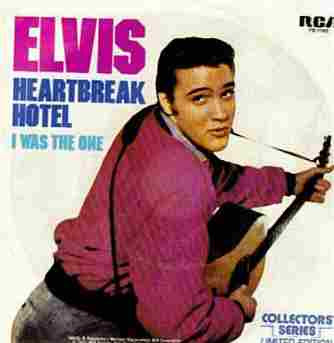 I can’t believe that I let this one get by me. However, since it was #1 for 8 weeks I feel safe in saying that on this day in music history Heartbreak Hotel by Elvis Presley was the #1 song in the country in 1956. It began its 8 week run on April 21, 1956. This song took Elvis from being local hit to a national phenomenon. He was able to build upon the foundation that Bill Haley and the Comets set up with Rock Around the Clock. Elvis began his recording career when he stopped by the Memphis Recording Service to record two songs for his Mother. Eventually this all led to him getting signed to Sun Records that was owned by Sam Phillips who also owned the Memphis Recording Service. Mae Axton, Mother of Hoyt Axton, worked for Col. Tom Parker and when he took over managing Elvis she told him that he needed a million seller and I’m going to write it for you. Mae, Elvis and Tommy Durden wrote the song together. It was written after Tommy showed Mae a newspaper article about a man who killed himself left a one line note that said “I walk a lonely street.” Mae put the Heartbreak Hotel at the end of the lonely street and in about 22 minutes they had finished writing a #1 song. The song was released in January of 1956. Elvis made the rounds of TV shows like Tommy and Jimmy Dorsey’s Stage Show to promote the song. However, it was not until April 3, 1956 when he was on NBC’s Milton Berle show with one-quarter of the USA’s population at that time. Eighteen days later it was the 10th #1 song on the Billboard charts and by the end of the year was rated as the years #1 single.
Posted by Rick L. Phillips at 3:01 AM No comments: