Posted by Rick L. Phillips at 7:03 AM No comments:

In A World Where...There Is No Don LaFontaine 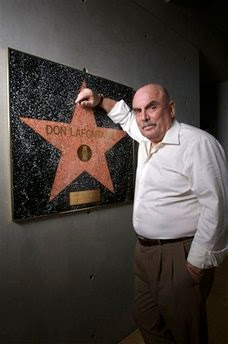 When I was studying broadcasting Don LaFontaine had the job that most of the guys wanted. He also had the voice that we all wanted. Today he died at the age of 68. For most of his career people only knew his voice. In recent years his face and name were becoming known to movie and TV audiences. I think that had he lived even greater fame was on the horizon. Still he left a wonderful broadcast and entertainment legacy as much as Mel Blank, Orson Welles, Paul Frees or Thurl Ravenscroft.
The person who is hired to do voice overs for the movies better not use his signature phrase "In a world..." Movie audiences will be too sad to hear it. He once said that he used the phrase as it was the beginning of the sentence that described the setting of the movie in one sentence. In another interview he said that his voice has been that way since it changed in school. He hated his voice till he and his friends realized he could call up the school and say he was their Father to get them all out of classes.
Rest in Peace Don LaFontaine.

Posted by Rick L. Phillips at 5:16 PM No comments:

Well today I start a new blog. I have always been a fan of many Marvel heroes. From the big guns of Spider-Man, Captain America and Iron Man to the lesser knowns of 3-D Man, Hawkeye and Werewolf by Night. Today being Labor Day I start one dedicated to Captain America.
Posted by Rick L. Phillips at 10:40 AM No comments:

Have you ever wondered who it is that designed these ads for the comic books? Well today at Dial B For Blog Robby Reed is doing 24 hours of special postings that brings one of those unsung heroes to light. Every 2 hours Robby will be putting up a new post

Yes this Labor Day you can read about Gaspar Saladino. Sadly it also gives us a look at the last issue of Dial B For Blog.
Posted by Rick L. Phillips at 12:01 AM No comments:

Trouble with family court in Kenton County in Kentucky

If anyone has ever had any troubles with the Family Court in Kenton County in Kentucky please sign this petition. I have started this as I know of a family that is having problems with the system. He is a teenager and the boy has tried to maintain a relationship with his Dad but he has constantly abused him physically. His Dad's new wife does the same thing. When his Dad and he were fighting she took the boys glasses and told him to "beat the shit out of him." When he has returned to his Mom he would have bruises on his arms, back and legs. His Dad once had the police called on him at an amusement park for being abusive to him and his Mom had to come and get him. One time his Dad kicked him between the legs with steel toed boots. When he saw his Mom she had to take him to the hospital and he had some internal bleeding. He doesn't want to be with his Dad but he goes as the court orders him and he doesn't want to cause any more trouble for him or his Mom.
In court the Dad lies about him and his Mom. Even though the Mom's lawyer proves they aren't true the court sides with the Dad. The Mom is a good Mom. The Dad tries to make her look like she isn't. He also tries to make it look like there is something wrong with his son. There is nothing wrong with him. He is a good boy. I want him to grow up to be a good man but with this all going on that will be hard. He tried to tell all of this to the court but they just seemed to ignore him.
Also, the GAL didn't do through interviews. The GAL is to represent the children but the information isn't correct. The Judge can't check out the information the GAL gives him. So he believes whatever they tell him.
This is not an environment for anyone to live in. If you have had troubles with the Family Court system in Kenton County Kentucky please sign the petition at iPetitions online. Reform is needed in family court.
Posted by Rick L. Phillips at 7:04 PM

This Day In Music History: Debbie Reynolds and Tammy 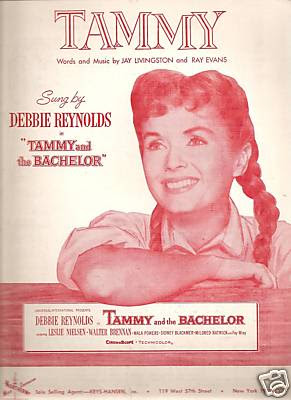 I can't believe I almost forgot this #1 song. I had been looking forward to posting it but kept putting it off. Only today did I remember it. Thankfully the song was #1 for 3 weeks. It was from August 26, 1957 to September 8, 1957 and returned for another week on September 16, 1957.
The song of course I am talking about is "Tammy" by Debbie Reynolds. It was the #1 song in the country on this day in music history.
The song broke a long run of male domination for the #1 spot on the Billboard charts. Gogi Grant was the last woman to have a #1 song on that chart. That was in July of 1956.
The song was helped to the top of the pops with it being the title track to the movie "Tammy and the Bachelor." It starred Debbie and Leslie Nielsen. Debbie sang the song in the movie and it was nominated for an Oscar. She sang it on the Academy Awards on March 26, 1958.
Debbie sang the song only accompanied by a piano. Not satisfied with that they added more before putting it into the film and added a Henry Mancini arrangement. Coral Records didn't have much faith in the song but released it anyway. When the song hit #1 it helped to boost the movie and a film franchise was born.
Debbie has had a professional and personal life that has been fodder for the tabloids ever since. In 1966 she became the first and so far only #1 artist to play the life of another #1 artist. She had the title role in the movie "The Singing Nun." It was about the life of Sister Luc-Gabrielle who had the #1 hit "Dominique" on December 7, 1963.
Posted by Rick L. Phillips at 2:07 PM No comments: