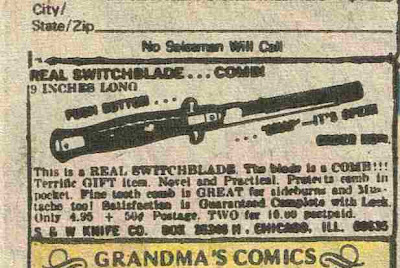 I saw this ad today in an old comic book and it reminded me of a Christmas gift I once got from a cousin. I had not even noticed this ad in my comic books at the time so this was a great surprise to me. I had thought it was clever that someone invented a comb that could pop out of the handle at the touch of a button.
Now I have to admit to a nervous habit I have. When I am nervous or thinking I tap to the tune of music. Maybe it is playing on the radio at the moment or maybe it is a song I am thinking of at the time. I have done this with mostly pens and pencils and at times a comb and nothing ever broke. So I wasn't thinking when I started doing it with this comb while it was ejected out. When I looked down I notice that half of the teeth of the comb were missing. Here it was Christmas day and I had already broken my gift. I still used what was left of it and even after the rest broke off I kept old toothless around as I still like it. Maybe one day I will see a switchblade comb for sale and get it again as I still think it is kind of neat.
Posted by Rick L. Phillips at 2:18 PM 2 comments:

I Am At It Again

Well I am at it again. I have created a new blog for the Marvel character Millie the Model at this site.
Posted by Rick L. Phillips at 8:58 PM No comments:

Monkeemen Will Come To The Rescue This Friday

This Friday Dial B For Blog will be posting their article on the Monkeemen. As always it should be a fun read.
The above picture came when they reunited in 1997 and cut a new CD and toured England. I remember that sometimes on the show The Monkees went into a phone booth and changed into their hero guises. I prefer to think of this photo before their change and that the Monkeemen were coming to the rescue of their fans 30 years later.
Posted by Rick L. Phillips at 12:01 AM No comments: