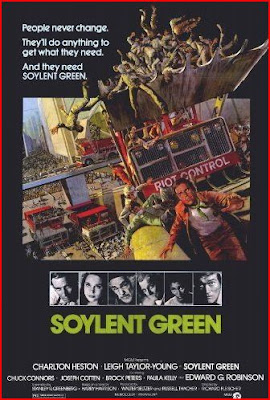 I am toying with the idea of making this site dedicated to reviews of movies,tv shows, comic books and music that I read,see and hear. I did one of the TV shows, WKRP in Cincinnati and recently Dark Skies. Today I am doing one of an old sci-fi film Soylent Green. The movie came out in 1973. I like seeing movies fromthe late 60's and early 70's as you get a good but sometimes odd pairing of the movies golden age of actors with the then new age of actors. As many people know this film starred Charlton Heston with Leigh Taylor Young, Chuck Conners, Josepth Cotton and Edward G. Robinson. This cast is a good examploe of odd casting that worked. I espically liked the scenes that had Mr. Conners and Mr. Robinson opposite Mr. Heston. What you may not know about this film is that this film was based on a book called "Make Room! Make Room!" by Harry Harrison. I haven't read the book so I won't discuss that here. This was also the last movie to star Edward G. Robinson. He died before it came out. It seems odd but approiate that he passed away in the film. Kind of gave movie fans closure to some of his fans.
The film was actually an answer to the population explosion that the world was experiencing in the 60's and 70's. Overcrowdind in every country and mjor city was and still is a concern. How would we feed them all? Real food is now gone in this bleak future world. Only the manufactured food called Soylent is able to sustain us. They are identified by different colors and the most popular is the one is Soylent Green.
A man is murdered by a hired killer. We aren't told who or why at first. In this way the film is really murder mystery. Heston is a cop and he investigates the murder. As he peels back the layers he finds that the food company is behind it and, as most movie fans know by now, that Soylent Green is really made from corpses of dead people. Soylent Green is people.
If your only exposure to this ending is the one they spoofed on Saturday Night Live then you will be disappointed. Heston doesn't run through crowds shouting that famous phrase at the end. He is shot and carried out. He raises his hand soaked in his own blood saying the phrase and trying to warn them that one day they may breed us like cattle.
With the excepton of this taking place in the future and food being manufactured form people, there is very little to associate this in the science fiction area as it has been for decades. It is more of a cop drama then anything else. A pretty boring onw too. The acting is great but not enough to save it for my money. Still if you want the movie, book or the poster you can get them at Amazon. The on good thing about this movie was that it showed that Chuck Conners was a good an actore as Charlton Heston. More famous for his heroic roles on TV like the Rifleman and Branded, Conners was even better in films as the villian. I wish he had as big a film career as he had in TV.