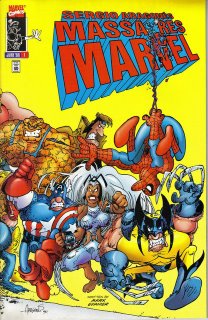 The things you find when you are looking through boxes in your basement. I came across this earlier this week. I don't remember the story so I re-read it. It is pretty good. Now this book was put out in 1996. Since it is 10 years old I figure that no spoiler warning is needed. However, if you have not read it and want to then stop reading now. Get off the internet. Turn off your computer and go to your nearest comic book shop to see if they have it in their back issue bin.
Why they did this book I don't know. Perhaps Fred Hembeck Destroys the Marvel Universe was a bigger seller then expected. The book is drawn by Sergio but written by Mark Evanier. They have arrived in New York to sell their new comic book idea to Marvel. However, when they arrive none of the staff are in the office. Sergio wants to know where is Stan Lee, Steve Ditko or Jack Kirby. Mark says that's what I like about you Sergio. You're always so up to date.
While waiting Mark decides to look into some newsgroups on the internet. Sergio happens to see a notice on the board that says if all the books aren't caught up and on time everyone will be fired. Wanting to be nice and helpful Sergio decides to finish all the books. He tries to improve them by connecting them all with the heros all fighting the same enemy he calls the Seagoing Soarer. He takes over the oceans by freezing him in water. Next he takes on the Fantastic Four where the running joke is how everyone quits the group. Including heros who were never in the group to begin with. Then it is on to Spider-Man who recaps his origin because it has been months since he has done it and it always cheers him up. Doc Ock helps him kidnap Spidey. Then it is off the Silver Surfer and Dr. Strange. The good Dr. isn't in it for long as Galactus is comming and there won't be enough room on the page for all three of them. You see it is in Galactus' contract to get a full page on his arrival. It keeps going on like this till they figure out who can stop the Seagoing Soarer. The Hulk grabs Sergio by his hand and drags him into the comic book. Soon it is revealed that the identity of the Seagoing Soarer is...Sergio Aragones. You see if you change the letters around Sergio Aragones spells Seagoing Soarer. The Soarer wants total newstand domination. To stop him Sergio convinces him to let him draw his comic book. When the executives at Marvel see it they say the art is too silly and the figures are almost in proportion. It will never sell. His life now meaningless the Soarer now melts away.
Mark finds out that he dreamed it all. However, he sees that Sergio did try to get the books on time. It turns out that the staff was out to lunch when they arrived at the office and the memo was just a joke. When they see what Sergio did to the books they are not happy and chase them out of the building. After that treatment Sergio says he will never draw for them. Not even if they offer money. Mark tells him of his dream and Sergio doesn't believe it. He says Marvel won't print it even if he draws it.
As you can see I enjoyed the book and suggest you get a copy.