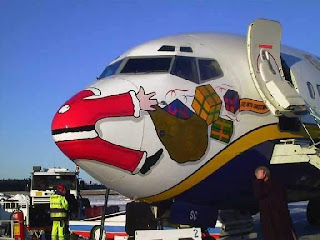 A friend e-mailed me this funny photo. I thought I would share it with you here.
Posted by Rick L. Phillips at 9:00 AM No comments:

This Day In Music History: Marvin Gaye and I Heard It Through the Grapevine 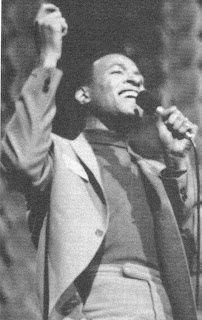 I Heard It Through the Grapevine by Marvin Gaye was the #1 song on the Billboard charts on this day in 1968. It is one of the longest runs at #1 that a Motown Record has had. It held down the top spot for 7 weeks. When it reached #1 Motown captured the top 3 spots on the chart. Diana Ross and the Supremes were at #2 with Love Child and Stevie Wonder was at #3 with For Once in My Life.
It was surprising at the time that Motown would release Marvin’s when they did as Gladys Knight and the Pips had a hit with it the year before. However, Marvin recorded his before they did and the arrangement was completely different then the one the Pips used. Other performers recorded the song before Marvin did. Performers like Smokey Robinson and the Miracles who released it on their Special Occasion album and the Isley Brothers whose version has not yet been released.
The song has been recorded by so many artist that the song has made the hit charts at least 5 times. However, it is Marvin Gaye’s that the others are measured against. It was the 18th single of Marvin’s to make the charts and his first #1 hit.
Posted by Rick L. Phillips at 3:01 AM No comments: 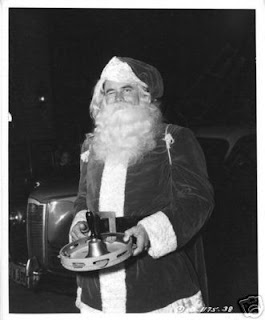 I remember my first Christmas adventure with Grandma. I was just a kid. I remember tearing across town on my bike one day to hear my big sister dropped the bomb: "There is no Santa Claus," she jeered. "Even dummies know that!"
My Grandma was not the gushy kind, never had been. I fled to her that day because I knew she would be straight with me. I knew Grandma always told the truth, and I knew that the truth always went down a whole lot easier when swallowed with one of her "world-famous" cinnamon buns. I knew they were world-famous, because Grandma said so. It had to be true. Grandma was home, and the buns were still warm. Between bites, I told her everything. She was ready for me. "No Santa Claus?"
She snorted...."Ridiculous! Don't believe it. That rumor has been going around for years, and it makes me mad, plain mad!! Now, put on your coat, and let's go."
"Go? Go where, Grandma?" I asked. I hadn't even finished my second world-famous cinnamon bun.
"Where" turned out to be Kerby's General Store, the one store in town that had a little bit of just about everything. As we walked through its doors, Grandma handed me ten dollars. That was a bundle in those days. "Take this money," she said, "and buy something for someone who needs it. I'll wait for you in the car. "Then she turned and walked out of Kerby's.
I was only eight years old. I'd often gone shopping with my mother, but never had I shopped for anything all by myself. The store seemed big and crowded, full of people scrambling to finish their Christmas shopping. For a few moments I just stood there, confused, clutching that ten-dollar bill, wondering what to buy, and who on earth to buy it for. I thought of everybody I knew: my family, my friends, my neighbors, the kids at school, and the people who went to my church. I was just about thought out, when I suddenly thought of Bobby Decker. He was a kid with bad breath and messy hair, and he sat right behind me in Mrs. Pollock's second grade class. Bobby Decker didn't have a coat. I knew that because he never went out to recess during the winter. His mother always wrote a note, telling the teacher that he had a cough, but all we kids knew that Bobby Decker didn't have a cough; he didn't have a good coat. I fingered the ten-dollar bill with growing excitement. I would buy Bobby Decker a coat! I settled on a red corduroy one that had a hood to it. It looked real warm, and he would like that.
"Is this a Christmas present for someone?" the lady behind the counter asked kindly, as I laid my ten dollars down. "Yes, ma'am," I replied shyly. "It's for Bobby."
The nice lady smiled at me, as I told her about how Bobby really needed a good winter coat. I didn't get any change, but she put the coat in a bag, smiled again, and wished me a Merry Christmas.
That evening, Grandma helped me wrap the coat in Christmas paper and ribbons and wrote, "To Bobby, From Santa Claus" on it(a little tag fell out of the coat, and Grandma tucked it in her Bible). Grandma said that Santa always insisted on secrecy. Then she drove me over to Bobby Decker's house, explaining as we went that I was now and forever officially, one of Santa's helpers. Grandma parked down the street from Bobby's house, and she and I crept noiselessly and hid in the bushes by his front walk. Then Grandma gave me a nudge. "All right, Santa Claus," she whispered, "get going."
I took a deep breath, dashed for his front door, threw the present down on his step, pounded his door and flew back to the safety of the bushes and Grandma. Together we waited breathlessly in the darkness for the front door to open. Finally it did, and there stood Bobby. Fifty years haven't dimmed the thrill of those moments spent shivering, beside my Grandma, in Bobby Decker's bushes. That night, I realized that those awful rumors about Santa Claus were just what Grandma said they were: ridiculous. Santa was alive and well, and we were on his team.
I still have the Bible, with the coat tag tucked inside: $19.95.
May you always have LOVE to share. And may you always believe in the magic of the spirit of Santa Claus.
Posted by Rick L. Phillips at 7:53 AM No comments: 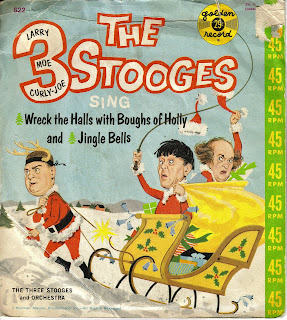 For me it isn't Christmas if I don't hear the Three Stooges Wreck the Halls and their version of Jingle Bells. This record is from the 1960's version of the comedy team. Thought you might like to see it.
Posted by Rick L. Phillips at 12:14 AM No comments: 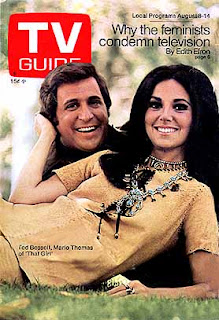 Well TV Land has just finished airing 48 hours of That Girl to celebrate that series joining their network lineup. First off from what I saw the series really holds up. Of course the fashions are a bit dated but that is to be expected. It is a sweet romantic comedy about a young woman named Ann Marie trying to make it as an actress in New York while dating her reporter boyfriend Donald Hollinger. The chemistry between Marlo Thomas as Ann and Ted Bessell as Donald was just the right mix. Add in Lew Parker as Ann’s Father Lou Marie who was always being protective of his daughter and this comedy had all it needed to be a hit. The love and respect the characters had for each other came through every week. The casting director must have been the best in the business as many other up and coming actors made appearances during its run. Future and current comedy greats like George Carlin, Dabney Coleman, Bernie Kopell, Ronnie Schell, and Ruth Buzzi were all cast members at one time or another. There were even guest appearances by actors like Bill Bixby, Carroll O’Conner, etc. Maybe they were joining the show to get approval from Marlo’s Daddy. Danny Thomas was a big star and powerful TV producer himself with hits like Make Room for Daddy, The Dick Van Dyke Show and the Andy Griffith Show, just to name a few, behind him. The show was very well produced. I always love the beginning. I couldn’t wait to see how they would work in the title of the show on each episode. For those of you who have not seen That Girl it went something like this.
A TV producer is walking down the street with a director.
TV Producer: We need a new face for the show. A young woman who is pretty and bright with sex appeal.
Director: Don’t forget she has to have that girl next door quality. Where are we going to find someone like that?
Suddenly they see Ann Marie coming down the street.
TV Producer: We need someone like (he points to Ann)…That Girl!
Cue the theme song.
I always loved that. The setting might be different but you always knew they would point to Ann and call her That Girl.
Seasons one and two are now both out on DVD but I don’t plan to rush out and buy either one right now. I love TV and I love that I can now have my favorites on DVD. Perhaps one day people like me can have their own internet TV station. However, some shows are best seen on TV. To know that if you don’t watch it now then it may be months or years before you see it again has something of a thrill about it. I have no doubt I will one day buy That Girl on DVD but for now I will wait.
This marathon showing brought back some happy memories. I did see most of the shows on its first run but one memory of the show is from when it was rerun in my area. Every once in a while my Mom and my Aunt would take me and my cousin Rachel and go visit my twentysomething cousin Toni. She was a young wife and mother. The three of them would usually talk in the other room. Rachel and I would be in the living room. We both liked music but for some reason Toni would not let us play her stereo. She would let us watch TV. Usually it had on Captain Kangaroo or the local children’s show Uncle Al. There were times they were showing reruns of Here’s Lucy and That Girl. Some of my memories of the show come from watching it on Toni’s TV.
You can go here to a posting about the shows 40th anniversary. or click on the title above.
Posted by Rick L. Phillips at 10:44 PM No comments: 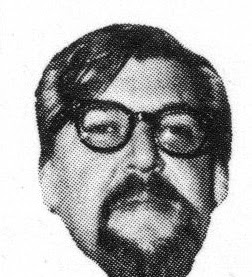 On December 11, 1927 John Buscema was born. He spent most of his comic book career at Marvel. He was mostly known for his wonderful art on Conan. Mr. Buscema gave a lot back to the art community when he opened his own art school in the 1970’s and later when he wrote with Stan Lee the best selling book How to Draw Comic’s the Marvel Way. In September of 2001 he produced his last comic book. It was for DC comics and called Just Imagine Stan Lee with John Buscema creating Superman. He was staring work on a five issue mini series with Roy Thomas when he passed away from cancer in January of 2002. He may be gone but he will never be forgotten.
You can click here
or on the title above to go to his site that is dedicated to his work and memory.
Posted by Rick L. Phillips at 10:27 PM No comments: