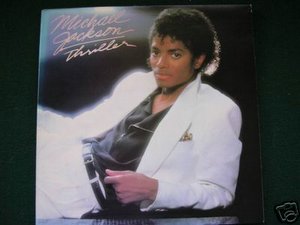 Continuing in my musical frame of mind I would like to mention another mini movie musical. Before David Bowie's Jazzin for Blue Jean there was Michael Jackson with Thriller. He hired the right people, mostly John Landis, to make a top notch video. It was a horror movie with music and dancing. I never have been a fan of the Rocky Horror Picture show but I can just imagine Mr. Landis taking notes from that and doing it just abit better. In the early 80's MTV and the musicians were on the right track with how to promote their music. Concept videos like this and Jazzin For Blue Jean captured the music crowd's attention in the 80's the same way concept albums like Sgt. Pepper's Lonely Heart's Club Band did in the 60's. Somewhere along the way I think they went way off track. However they must still be doing well since they are still around. The above photo is not from my collection. It is from this auction on e-bay. Go there if you want to place a bid.

Posted by Rick L. Phillips at 1:37 PM No comments: 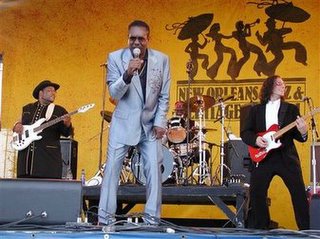 Just heard that Mr. Wilson Pickett died of a heart attack on Jan. 19th. He is best known for his hit song "The Midnight Hour" I have always liked that song. He was 64 when he passed away. For more info on Mr. Pickett you can click here.

Posted by Rick L. Phillips at 7:11 AM No comments:

Sad to say but we will see the passing of an entertainment landmark this comming weekend. Rhino Records makes this announcement in their latest Newsletter.
Rhino Store’s Last Sale
Sad, but true: the store where it all began thirty years ago is going out of business. The Rhino Record Store on Westwood Boulevard in Los Angeles is holding its last-ever parking lot sale on January 21 & 22. From 10 AM to 4 PM on Saturday and Sunday, CDs, DVDs, LPs, and VHS tapes will be priced to move in one final bargain blowout. If you’re in Southern California this weekend, stop by for a sweet deal and to tip your hat to the passing of a true music retailing landmark…
It was back in the early 70's, 1973 I believe, that Richard Foos and Harold Bronson opened up the Rhino Records music store. For most people that would be an accomplishment in itself. However, these two had bigger dreams and four years later it was a record label. It was small and they struggled to get their records to the public till they signed a record deal with Capitol Record in 1986 and around that time they also got the rights to the Monkees from Columbia Pictures. This put Rhino Records on the map. By the late 1990's Rhino was a unit of Time-Warner and started another label. Rhino Handmade released limited edition reissues. Among the first efforts were "The Monkees Headquaters Sessions" and "The Monkees Summer 1967 the Complete US Concert Recordings" A recent release last year is "Allen Sherman My Son the Box"
Harold Bronson was the biggest Monkess connection for the label. Mr. Bronson started out as a rock music journelist. He has been published in Rolling Stone, The Los Angeles Times and the UCLA Daily Bruin. In 1971 he interviewed Mike Nesmith and Micky Dolenz for and article about the Monkees. He became friends with Peter Tork when they were on the same softball league. In 1975 when Dolenz, Jones, Boyce and Hart was formed he got interviews with all of them. His friendship with the Monkees grew over the years and resulted in him overseeing the entire reissue of the Monkees catalogue for Rhino Records in the 1980's. Later, in 1996, he was the one who encouraged all four of them to reunite to record their first album since the 60's.
All this was from the humble beginnings of a local record store in Los Angeles. Here is a link to Rhino Records website. However, if I were in the LA area this weekend I would go to the store and visit this historical landmark in music history. Next weekend it just might be a Starbucks.

Posted by Rick L. Phillips at 4:17 AM No comments: 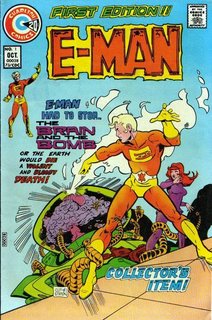 Phew! I have just enough time to wish Joe Stanton Happy Birthday before the day is over. Mr. Stanton is a wonderful prolific artist. He has worked for all the major comic book companies. However, he is best known as the co-creator of E-Man. It was published by Charlton Comics in the 1970's. Later with the boom in independent publishers he was published by First comics. I lost track of the charactor after that but you can find out more on this E-Man fan site which is where the above photo is from. Also at Twomorrows.com there is an interview with the birthday boy. I just took at quick look at the interview and see that he says he was born on the 19th so I am a little bit early. Either way Happy Birthday Joe and thanks for the great art and hours of fun. 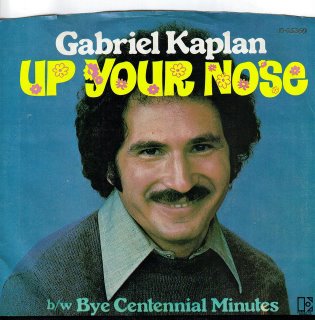 Going through the old 45's collection I came upon this gone and for most people forgotten record. It was the height of the Welcome Back Kotter show and not only did John Travolta get a record deal. So did Gabe Kaplan. The show was a boost in popularity for both. Why give either of them a record deal? Especially Mr. Kaplan. It is not him singing. He is just reciting the shows famous catch phrase and doing impressions. He is a comedian and should have done a comedy album but instead he only release this 45. The back is more impression of him keeping in tune with the times on his bye centennial minutes. It was 1976 and between programs you wouild see people talking about the history of our country when it was founded in 1776. I found this record very funny when I was about 14 or 15. I'll have to play it again sometime to see if it holds up. It will at least be nice for nostalgia.

The Monkees "Heart and Soul" 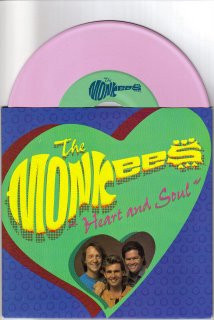 In an earlier post I mentioned the 80's song by the Monkees called Heart and Soul . It was a good pop tune and I have two copies of the 45. Why do I have two copies of the record? I'm glad that you asked. I heard them do the song as an encore at their concert in Cincinnati, Ohio. I couldn't wait for it to come out. They mentioned it was their new single and I didn't even know they were doing a new album at that time. So I bought the new album and the single as soon as they came out. As I said before it was a good tune and one that should have been a big hit. It would have ended there. However,I went on a trip with my friend Chuck to Michigan. One day we wound up in the little town of Iron Mountian, Mich. We ate breakfast and then looked around the town. We found a little record store. While looking in the store I saw they had the single that you see pictured above. It caught my eye not just because it was the Monkees but because the picture sleeve was printed on better quality paper so the picture looked better. I wondered why they printed this one differently. Then I pulled out the record and found the answer. It was a colored disc! If you are reading this post and too young to remember albums and 45's then I will tell you that a colored disc was a much sought after and rare collector's item. I normally have to have a good reason to buy the same song twice. A colored disc was a great reason. I looked to see if they had another copy so I could buy one for a friend back home but this was the only copy they had. I quickly went to the counter and purchased it. After we got back home I was talking to another friend named Jeff. He is the one I was going to buy the other copy for but they didn't have any more copies. Now Jeff has almost always worked in the local record business. For years he managed a record store. After that went out of business, not because of bad management but because of other business reasons, he went to work for the distributor and other record stores. So Jeff has alot of music connections and has one of the biggest music and video collections this side of the Mississippi. Especially on the Beatles and the Monkees. I mentioned the Monkees 45 that I found. While he had heard of the song he had never heard of them releasing a colored disc. He quickly checked with one of his connections from Rhino Records, the Monkees record company at that time. He found out that they did release a few colored disc. He said there weren't many made so it may become a collector's item. And I had one of them. Also, I found out about this before someone in the music business heard about it and didn't have one himself. He probably has one by now but that has never happend to me before. To this day I don't recall seeing another copy of this record. Maybe it is worth some money but if not it was at least worth this story.

Posted by Rick L. Phillips at 4:25 AM No comments: