A batch of Osmond videos

Ending Osmonds video week are a batch of Osmond videos from Jimmy to Donny and Marie.

The Osmonds on the Andy Williams Christmas Show

Here is a video from You Tube with the Osmond Brothers singing and skating on an Andy Williams Christmas episode. 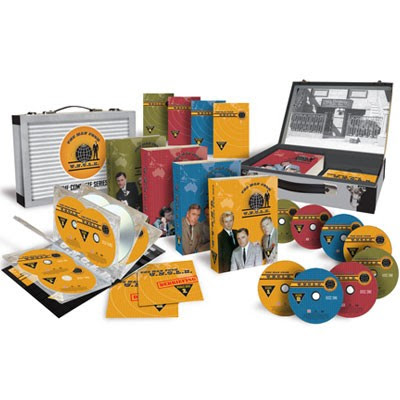 Just a reminder that if you have someone who is fan of the Man From UNCLE then you can get the complete series on DVD at Time Life. It is 41 DVDs and if you enter their special code you can get free standard shipping. It comes in a collectible case shaped to look like an attache' case. Click on the link below to go to their site to order it and have it in time for Christmas.

Posted by Rick L. Phillips at 3:03 AM No comments:

The Osmonds at the 1972 Ohio State Fair

Yes according to what I read this is the Osmonds at the 72 Ohio State Fair. Wish I could have gone to see it. Jay Osmond takes center stage as he plays drums and sings one of his favorite songs. Many people said that the Osmonds were like the Monkees in that they couldn't play their own instruments. Well this proves them wrong and the Osmonds really do rock.

Here is a commercial from around 1979 or 1980. There is some funny interplay between Donny and Marie at the end. This may have been around the time they did a movie called "Goin' Coconuts" I never saw the movie but I heard it wasn't very good. If I could find it sometime I would like to see it.

The Osmonds on Saturday Morning Television

I have to admit that I watch the TV show Dancing with the Stars. While it is sad to hear that Mr. Osmond has passed on I am happy that his daughter Marie is doing so well on the show. No matter what the results are tonight I am making the rest of this week Osmond week by showing videos that star them.
Today is the opening of an episode of from the Osmond Brothers cartoon series. Yes in 1972 they were so popular they had their own Saturday morning cartoon series. It was produced by Rankin/Bass who did the Christmas specials back then. Their opening theme song as you can hear was their hit song "One Bad Apple".

Posted by Rick L. Phillips at 6:59 PM No comments: 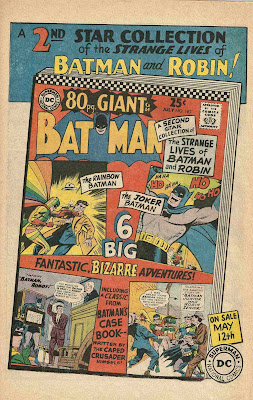 I loved these 80 page giant books from the 1960's. Some times Mom and Dad would buy one for me or I would look at one when I was at my cousin Steve's home. Now Steve was older then me so he could read but I couldn't. I just looked at the pictures. One of my favorites was this one that you see above. The reason was the story of the Rainbow Batman. Like I said I couldn't read but i loved seeing Batman in that bright rainbow colored uniform. I can't tell you anything about the story but my young eyes loved those bright colors. The other story in this book that made an impression was the story of Batman Jr. and Robin Sr. As I got older I re-read the story at some point and remember its plot a little better. As I recall Dick Grayson had gotten older but never took on the name of Batman. Bruce got married and had a son. He asked Dick to train him to take over as Batman. That is how I remember it. I may be wrong and mixing it up with another story.
I have fond memories of reading these 80 page giants in the car as Mom and Dad had to go somewhere. They kept trying to get me to stop reading in the car as they were afraid it would make me sick. It never did then but now that I am older it is another story. Other fond memories are of being at Steve's and sitting on his bed reading them and looking with awe at his impressive collection. It's been awhile since I was at his home but the last time I was I still had that same feeling when I viewed his collection.
Posted by Rick L. Phillips at 3:01 AM 1 comment:

War of the Worlds Seaon One 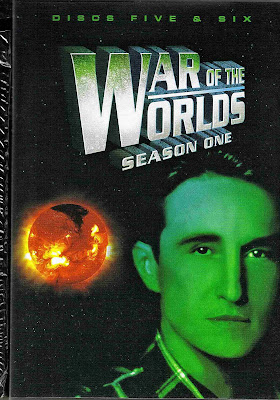 Well I just got this so I haven't had time to view it but I wanted to let anyone know that War of the Worlds the TV series has season one available on DVD. Until a few weeks ago I didn't know that this was available. This series was on first run syndication in 1988. Just like this DVD set I didn't know about it till I ran across it on television. It centered around Dr. Harrison Blackwood and his group. The aliens who were captured in the George Pal movie in the 1950's were now accidentally freed by terrorist. Until this this time the threat of the aliens conquering Earth had been forgotten. Dr. Blackwood and his group are a human resistance group fighting them. My favorite character in the series was the US government liaison Colonel Ironhorse. Normally the military officer in shows like this tend to get in the way of the other heroes. However, the actor playing the part, Richard Chaves, and the writers were able to elevate this role and created a great character. He almost overshadowed the others and threatened to be come the lead in the series.
The show only lasted about two seasons. Season one was the best. New producers were brought in wanted to take the show in a new direction. The character of Colonel Ironhorse and Norton Drake, played by Philip Akin, were not considered important to that direction. So the actors were thanked for helping make the series successful and let go.
When the show came back for the 1989-1990 season their characters were killed off. That season the new direction looked at the war from the point of view of the aliens. With this it took on a darker tone. I tried to like this new direction but I could not get use to it. Perhaps of Ironhorse and Norton Drake were kept with the series I would have enjoyed it more but after only a few episodes I stopped watching. I must not have been the only one. The series was not renewed for the 1990-1991 season. While the series ended with the war being over it had alot of loose ends from what others have said. I can only believe that these loose ends were to be tied up next season.
So I recommend that you buy this if you see it for sale. You'll have to make up your own mind when season two comes out.
Posted by Rick L. Phillips at 9:55 AM 1 comment: