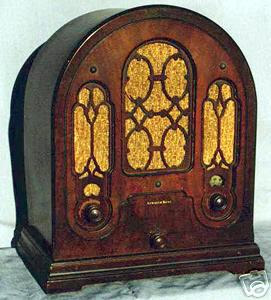 Here is the old family comedy A Date With Judy and with guest star Frank Sinatra.

Broadway Is My Beat 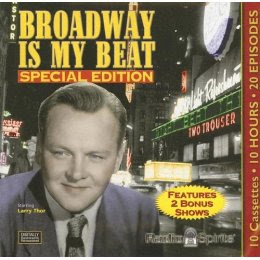 Your average person who didn't grow up with radio shows or anyone who loved those shows just think of Fibber McGee and Molly, Superman, the Lone Ranger etc. However, there is a wealth of other shows that the average person may never hear. This is one of them the drama Broadway Is My Beat. Listen and enjoy. 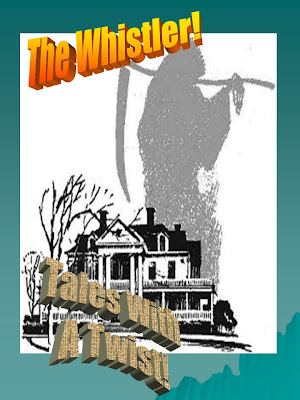 This weekend the Old Time Radio Convention comes to town. I won't be able to attend and for those like me I am posting links to some OTR shows. Here is one from the Whistler.

A word from the Comic Book Letterheads Museum.
Just another word that if you wish to donate any scans of letterheads from the letters pages of your favorite comic book you can e-mail them to me and I will post them here. If you have a "G" rated site I will post a link to it and list you as a benefactor as you will be helping to preserve what may soon be a forgotten art. At present from my small collection I have enough to post to the museum till April 18th of this month. So go to the "view my complete profile" to the right to get my email address and send them today. I would really like the ones from Nova in the 1970's as he was my favorite growing up and now I don't have them anymore.
Posted by Rick L. Phillips at 7:57 PM No comments:

What Should Have Been Released As 45's For The Monkees 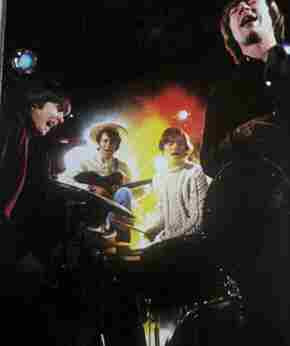 Well over at Forgotten Hits as well as their e-mail newsletter they have gotten me to thinking about alot musically. Mostly they have gotten me to wondering what popular album cuts should have been released as singles. Many fans know them as well as the hits. Now Kent of Forgotten hits has said that She should have been a single. I agree and while it wasn't released in the USA as a 45 I believe it was overseas. As Kent said Words was released as an A side but quickly became the B side when Pleasant Valley Sunday proved to be slightly more popular and this gave the Monkees a double sided hit. Also they mention I Wanna Be Free as it was a popular song on AM radio back when it first came out. Enough recap of that now I am here to tell you what I believe should have been released from the albums. Forgotten hits has already covered the first two tunes.

First is the Monkees first album. I think they got it right with only releasing Last Train to Clarksville. Since it was #1 in the USA that goes without saying. If I had to chose any song as a possible follow up it would have to be Saturday's Child written by a young David Gates, Take A Giant Step or maybe, and it is a longshot, I'll Be True To You.

More of the Monkees was their second album and as She was mentioned above it isn't included here. However, Mary,Mary should not have been passed over either. Others are Look Out (Here Comes Tomorrow) and the one I can't believe they missed was Sometime In The Morning. That is the song that could have let only radio listeners know the depth of Micky Dolenz's singing.

Their third album was Headquarters and the one that finally showed how well they could produce their own music. Nearly every song is worthy of hit single status but for some reason no single came forth in America. I won't include Randy Scouse Git as it was released in Britain. For me the two stand outs are Forget That Girl, with Davy's best vocal performance in my opinion, and can anyone believe they never released For Pete's Sake as a 45? It is a brilliant pop tune co-written by Peter Tork that sums up the flower child generation of the 60's and a wonderful vocal performance by Micky. To top it off since it was the closing theme of their sit-com in the 2nd season it was given more exposure then any of their songs as it was on TV once a week that year. This could have been one of their biggest hits. Another big hit could have been the song called Band 6...just kidding. No I think Shades of Gray should have been a single. Pop tunes were getting more introspective at that time and this would have been a great way to show the Monkees music was starting to grow up.

Their 5th lp, Birds, the Bees and the Monkees is really the weakest of their first 5 albums and the hits here are Daydream Believer that came out before the album and Valleri. They are the best songs on the album. The only possible other 45 could have been Tapioca Tundra. It is an odd little tune but it's catchy and enjoyable.

As you can see the Monkees could have had a lot of other hits. I wonder why Colgems never released them?
Posted by Rick L. Phillips at 3:01 AM 2 comments: 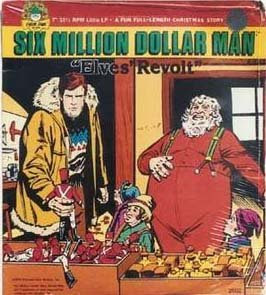 I know this isn't Neal Adams art but I saw the art for this Peter Pan record over at Neal Adams.com and it reminded me of a segment in the movie Scrooged. You can see it in the video below. Makes you wonder if they really thought about doing that Christmas Special.

Yesterday I mentioned that Eugene Levy played Perry Como on SCTV in a funny segment. Well here is that segment. 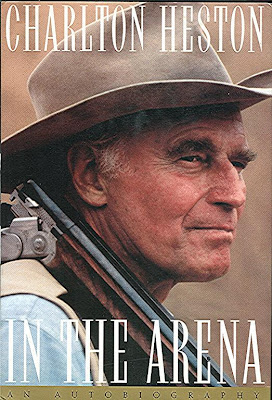 I heard early this morning that Charlton Heston died. Unlike some people I have reported on here whose works I like I actually met Mr. Heston. It was at Media Play in Florence, Ky. when he was promoting the book above. There were alot of people there and I was asked how far I came to meet Mr. Heston by a local reporter. Since I lived in the neighboring town I didn't make the cut for the news. The reporter seemed frustrated that most of the people there were locals. They wanted to get interviews with people who lived much farther away. I read the first chapter in line and when I got to talk to Mr. Heston he was very nice. He asked me if I liked the book. I thought perhaps he thought I bought it earlier and already read it. I told him I only read the first chapter in line and it seemed pretty good. He signed the book and said "I hope you like it." I told him I was sure I would and I moved on as I didn't want to hold up the line with a lot of questions. 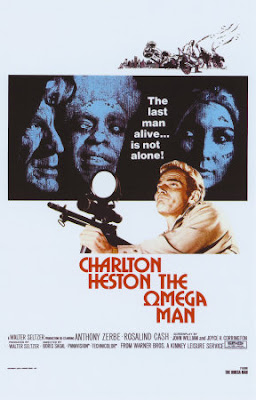 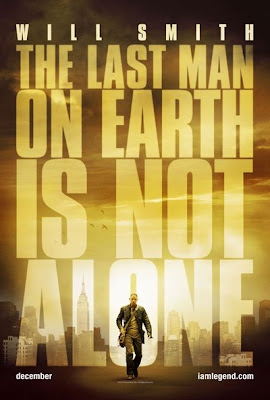 Later that night my wife and I watched an episode of The Big Bang Theory. You can see the streaming video of the episode if you go here. It has a scene where Leonard and some friends put on monkey mask to see a movie marathon of Planet of the Apes. It is all in order to stay away from Sheldon who is sick and not a very good patient. When I heard Mr. Heston died I thought that my Saturday afternoon was, without my realizing it, a tribute to Charlton Heston. It is nice to have a pleasant memory of meeting him and I can always enjoy his work when I see his classic movies again.
Posted by Rick L. Phillips at 4:09 PM No comments:

This Day In Music History: Perry Como and Round and Round 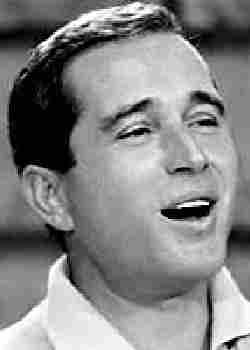 Perry Como was signed to one record label for quite a long time. In fact he was with RCA longer then most singers have been alive. He was signed to the label in June of 1943 and in 1983 RCA held a dinner in his honor to celebrate his 40th year with the label and his 50th year in show business.

Round and Round wasn't his first #1 hit but on this day in music history, April 6, 1957, it was his first in the Rock and Roll era. He had 8 #1 hits between 1945 and 1954. The first time he sang Round and Round was on his television show and the audience loved it so much RCA released it as a single.

Perry was the 7th son of the 7th son. He was the first of Pietro and Lucia Como's 13 children to be born in the United States. He was born May 18, 1912 in Canonsburg, Pa. It was a mining town but Perry avoided work in the mines by becoming an apprentice Barber. Soon he had his own barbershop where folks could get a shave, haircut and a song. He earned $125 a week as a barber. While on vacation he auditioned for Freddy Carlone's band. He was offered the job that paid $28 a week. He took the job.

Later Perry married Roselle Belline on July 31, 1933. Four days later he went on tour with with the band. Three years later Perry was singing in Warren, Ohio. Bandleader Ted Weems heard him and offered him a job on the spot as his lead vocalist for $50 a week. Perry accepted the job.
In 1942 Weems broke up the band because of the war and Perry returned home to Canonsburg. He intended to return to being a Barber. He was about to sign for a new shop when General Artists Corp. told him they wanted to give him his own radio show. He talked it over with his wife and they decided that if it didn't work out he could still return to barbering. So he signed on to host the Chesterfield Supper Club. He was also given some nightclub bookings and signed to RCA Victor as a solo artist.

Soon his first single Goodbye Sue was released and on NBC the Chesterfield Supper Club was a hit. He received rave reviews for his appearance at the nightclubs in New York. 20th Century Fox signed him to a movie deal. He made his first appearance in Something For The Boys with Phil Silver and Carmen Miranda and Vivian Blaine. He began to have a string of hits. The ones he had before Round and Round include Till The End Of Time, Prisoner Of Love, Don't Let The Stars Get In Your Eyes and a huge hit with Hot Diggity (Dog Ziggity Boom).

Soon the radio show moved to TV. Between NBC and a move to CBS his show was on TV from December 24, 1948 to June 12, 1963. Perry was so popular that the title soon changed to The Perry Como Show. When it went off the air Perry was still popular on TV as the host of the Kraft Music Hall Specials till 1967 and had his own Christmas specials for years. Always known as being laidback and relaxed, it was rumored that he took a nap till he had to go on the air. SCTV even did segment with Eugene Levy as a barely awake Perry singing during a TV show.

Below is a video of Perry singing the song on his show. They show a new way they have to preform the song and it seems that everyone enjoys the new way.

Posted by Rick L. Phillips at 9:29 AM No comments: