As you may recall I recently ordered the CD's of the new Monkees releases, Headquarters and PAC&J LTD. to get the new single "I Didn't Know You Had It In You Sally." Well I got the 45 but I still have yet to receive the CDs. I kept calling Rhino but kept being told it was on its way. Finally they said they would mail a replacement shipment. Great I thought I would be getting what I had paid for. Well Friday afternoon I was on the phone again to them. The young lady said that even the replacement shipment should have been here by now and it was unusual for two shipments of the same thing to go missing in the mail. (Especially since I got the specail 45 on time.) I told her I hoped they arrived Saturday. Well on Saturday I didn't get the CDs but I did get a DVD set of Buck Rogers that I ordered from Columbia House only a few days ago. I will wiat the rest of the week but if not I will be back on the phone to Rhino. I don't know if the problem is with Rhino or the post office but I hope it is resolved soon.
Posted by Rick L. Phillips at 9:02 PM No comments: 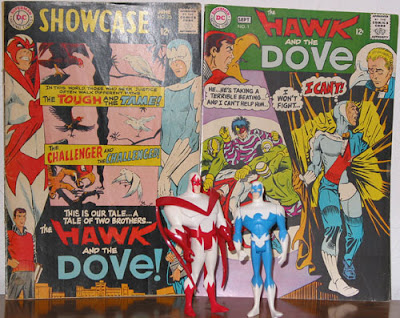 From Polite Dissent is the above diorama of the Hawk and the Dove. If possible they may be bigger Hawk and the Dove fans then I am. They have also, on the pages I recently viewed, discussed the second series of Hawk and Dove. It lasted longer then the first series but I still prefer the first series. I loked the way Ditko started the first series trying to teach people the difference between the law and justice. Hawk was still more militant but the new Dove was at times able to soften Hank up. I'll save more of this for another posting.
The action figures above are great. I got them when they first came out. I have always wanted Hawk and Dove action figures and I finally got them. Hey I had to get them as you may never see them again. They came with a figure of Wonder Woman as the three of them appeared together on Justice League Unlimted. I seem to have lost my Wonder Woman figure but I think it fell behind the book case and I will see it again once I can move the case.
Posted by Rick L. Phillips at 7:43 PM No comments: