A Month of Monkees by Dartman 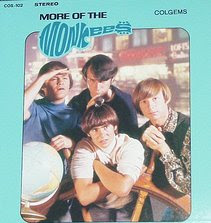 No the above album isn't a foreign release of the Monkees second LP. It is an "alternate reality" release and part of Dartman's Month of Monkees celebration at Dartman's World of Wonder. He started it August 12th and will end it on September 12th. That is the anniversary of the first showing of the Monkees TV series. It is really cool and he has some great downloads that may be hard to find. Check it out. Keep it up Dartman.
Posted by Rick L. Phillips at 12:01 AM No comments:

This Day In Music History: Sonny and Cher and I Got You Babe. 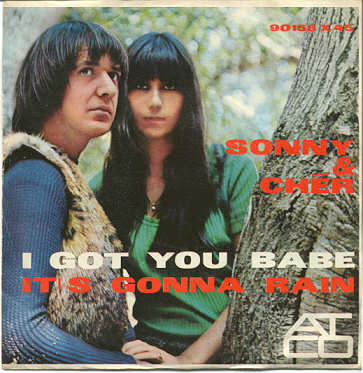 When Salvatore met Cherilyn at a coffee shop no one knew that music history was going to be made. You see this was really the first meeting of Salvatore "Sonny" Bono and Cherilyn "Cher" LaPiere. Later known only as Sonny and Cher.
Sonny had worked in the music business for a few years. He had some hits under his belt that he had written. Now he was the promotion man/background singer/writer for producer Phil Spector. Cher told him she was 18, she was really 16, and wanted to be a singer. Sonny took her to see Phil and got her a job as a background singer on his records. For awhile Sonny tried to get Phil to produce songs for Cher but mostly he refused. So Sonny used his own money to produce one for her. At the last minute Cher got nervous and asked Sonny to sing with her. So they recorded "Baby Don't Go" as a duet. Sonny said the best way he knew to tell if the song was a hit was to see if Phil liked it. If he wanted to buy the song Sonny knew it was a hit. Phil offered $500 for half the rights to the song. It only cost Sonny $135 to record it.
At the time Cher was under contract at Imperial as a solo artist under the name of Cherilyn. She had just released her first solo song titled "Dream Baby." Over at Atlantic Ahmet Ertegun was interested in signing them as a team. Reprise had some of their songs but no contract with the duo. They decided to sign as a duo with Atlantic and their songs would be released on their Atco label.
"I Got You Babe" was their second single for Atco. Sonny was excited and sent the tapes to Ahmet in New York. When he got a call from him Sonny was shocked to hear that "I Got You Babe" would be the B side and the A side would be "It's Gonna Rain." He could not convince him to release the song as the A side. So Sonny took the song to a local Los Angeles radio station. The program director, Ron Jacobs, only agreed to play the song once an hour if he got the song exclusively. The song became a huge local hit and forced Ahmet to release the song as the A side of their second single. It climbed the Billboard charts and became the #1 song in the country on this day in music history August 14, 1965. By the 1970's they got married, had a little girl and were contracted to host a TV show. The song became the theme to their show.
As we all know the marriage didn't last and the couple got divorced. But in November of 1987 the two reunited on the David Letterman show and sang "I Got You Babe" one last time. Fans finally saw that there was no animosity between the two.
A little over ten years later Sonny was killed in a skiing accident in South Lake Tahoe, CA. He was 62 years old.
Posted by Rick L. Phillips at 5:13 AM No comments:

Hey Jeff Barry fans! Here are a couple of pages from Archie Comics in 1969 with whom Jeff had strong ties to back then. Fans wanted to know more about Mr. Barry and the songs he produced for the Archies. I hate posting these as big as I had to on this one as it cuts off part of the article. But if you click on the picture you can read the whole thing.