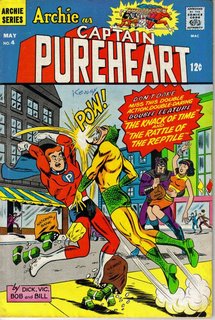 It is a little over a year since Pureheart the Powerful or as he is now called, Captain Pureheart, and his friends have shown up on the Riverdale scene. He now has his own book. Not much faith must have been put into the book. Back them most books were published monthly. Some were published bi-monthly. This one was published quarterly. Only 4 per year!!! I don't think any of them lasted past issue 8. Again look at the costume. It has changed alot since Life With Archie #46. Now it is redder then Archie's hair. He also has boots, gloves and a cape. Come to think of it his suit looks alot like Betty's Superteen outfit did in Life With Archie #50. Maybe Betty made the suit for him. Take a look at the top of the comic book and you will see a Archie changing into Pureheart in each phase of the change. I don't know why but I have always loved seeing things like that. Lots of characters were shown this way. Hawk and the Dove, The Hulk, The Creeper etc. Even in the movies when Lon Chaney Jr. became the Wolf Man. That did an awful lot to make him my favorite movie monster. However, as Peter David would say...but I digress.
Anyway I think the Archie version of superheroes could have had alot longer run. They were treated as a passing fad. As you can see to some comic book fans they were not a fad. Perhaps I will get into that on my next posting of them.