The Brave and the Bold: the Series 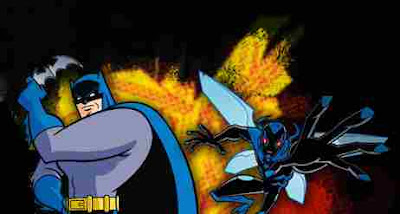 Well I finally got the time to watch the Brave and the Bold episode that I taped. I was busy and had to tape it. Also, I have a cousin who is a Batman fan and his family doesn't have cable. I told him I would tape it for him so he can watch the series later.
I was pleasantly surprised to see the show start at the end of an adventure that Batman had with Green Arrow. I am sure that Adama of Dispatches From The Arrowcave loved seeing that. However, I hope this doesn't mean that we won't see a full adventure with Bats and GA. They may be showing the partial adventures as to get in a team-up with as close to all of the DC characters as they can.
As much as I don't care for the new Blue Beetle I have to say that he worked well in this episode. I do think he needs a better costume. One that is closer to the classic look of one of the older Blue Beetles. I know a completely different one was needed to distinguish him from the Steve Ditko designed Beetle but a change is needed. Now that he is here to stay it will help old BB fans like myself warm up to him.
I really liked this episode which surprised me. Not only am I not a fan of the new Blue Beetle but I was not a big fan of "animated" space adventures. But this episode won me over. I would get rid of the voice over that makes it seem like Batman is writing it all in his journal. Still I can't wait to see the next episode.
Posted by Rick L. Phillips at 5:35 AM