My Conversation With Jughead Jones 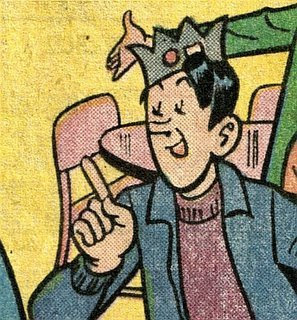 Last night I was home after getting home from the family Thanksgiving gatherings. Suddenly the doorbell rang. I took a peak out the window to see who it was and to my surprise it was Jughead Jones. As I opened the door to ask him in Jug greeted me like I was an old friend and not just someone who only had a couple of phone conversations with him.

On My Mind: Well Jug this is a surprise! It's good to see you.

OMM: Have a seat and relax.

As he sits he sees the Archie Christmas CD on the end table.

JJ: I see you already bought our reunion CD.

JJ: I'm glad. It's really the reason I'm here. I was passing though on my way to a personal appearance to promote the CD and wanted to say I was sorry I didn't tell you about it.

OMM: That's ok! I didn't even think about that.

JJ: Life has been pretty busy for me lately and it completely slipped my mind to call.

OMM: Really Jug you don't have to worry about that. But how did it come about? Last time we spoke was a year ago and it wasn't going to happen. So this reunion CD was a big surprise to me.

JJ: Well not only did Reggie have bad luck with the Banana Splits but Josie and the Pussycats didn't happen either.

JJ: Yeah! Anyway he and Reggie couldn't come to an agreement. So Reggie came to Riverdale to meet with us. It must have been meant to be because Veronica also came for a visit and didn't know Reggie was going to be here.

OMM: So that's just how it came to be? But why a Christmas album?

JJ: Well it was part out of necessity and part because we all love Christmas. But for some reason Archie didn't want to sing on all of the songs.

OMM: But he is the voice of the Archies!!

JJ: I know! We all thought how can we do a reunion album without Archie singing. He said we all had excellent voices and we need to showcase that more.

Before he continued I thought I should be a better host and ask Jug if he wanted anything to eat or drink.

JJ: No thanks. I am still full from my Thanksgiving meal. Contrary to popular belief even my stomach can get full. Now where was I?

OMM: You were saying how you all got to sing on the CD.

JJ: Not really all of us but Betty and Veronica. I told Arch I over heard Betty and Veronica say how they were looking forward to Christmas. Then they started harmonizing to Christmas Caroles and they sounded amazing. I think it was Reggie who said if we started now we could get a Christmas CD out before Thanksgiving. That started the ball rolling.

OMM: But Reggie didn't produce the CD. How did it help him out from being sued for not delivering before?

JJ: The record company gave Reggie a lot of extensions and were about to follow through on the lawsuit when we signed the contract. They were still angry that it took so long to get us and said they wouldn't sue but Reggie couldn't produce the album.

OMM: After all that work Reggie must have been mad.

JJ: He was but he worked it out that he could sort of executive produce it but had to come up with the person who would actually produce it. He contacted the groups old friend Ron Dante and he got the CD out in time for the holiday season.

With that Jug had to go. Maybe sometime I can get to interview Ron Dante himself. I don't know what I would ask but it would be fun to do.
Posted by Rick L. Phillips at 12:01 AM