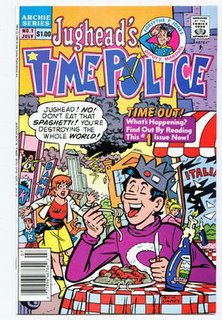 Here is another alternate Archie universe. Let's face it from Little Archie up to Archie's Super Teens they are alternate universes. In this one from 1990 Jughead is given yet another beanie with powers. Remember his first magic beanie, along with a special chant of
"Teeny weeny magic beanie, Pointing towards the sky; Give me muscle, power, vigor, Form a super guy!" changed him into Captain Hero in the 1960's. With this one he can travel through time. He finds out that the beanie was given to him by a decendent of Archie. January McAndrews is a member of the Time Police and Jughead finds that he is to become the greatest Time Cop ever. Together the keep things in line so that time doesn't go astray. They go to the Civil War, King Arther etc. In a departure from his usual style the art from issue 2 to the last is done by comic legend Gene Colan. It was alot of fun to read. Jughead even got an arch enemy in this series. I don't recall him having one in the Captain Hero series. Unless you count Evilheart. As Booksteve said on his site Evilheart was really an anti-hero. He was Pureheart enemy but would join with the heros to fight a common enemy. However, Jughead fought Morgan LeFaye twice in this 6 issues series in issues 2 and I think in issue 6. I use to have some of the issues. However, I don't now and had to go to this site to get a copy of issue #1 that you see above.