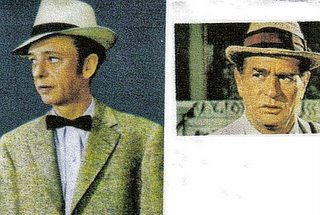 I was just over at News From ME and saw that both Don Knotts and Darren McGavin passed away yesterday. I have been fans of both for years. I was not shocked to hear about Mr. McGavin as he has been known to be in bad health for sometime now. Of course as readers of this blog know I became a fan of his with his preformance in "The Night Stalker." Later he won more fans when he played in the now annual holiday favorite "A Christmas Story." Later he appeared in and episode of "The X-Files" as a tip of the porkpie hat to "The Night Stalker" as it was the inspiration for the X-Files. Here is his authorized site.
I never met Mr. McGavin but I did meet Don Knotts. He was in Cincinnati years ago and had the stage all to himself. He answered questions about "The Andy Griffith Show", "Three's Company" and " The Incredible Mr. Limpet." I remember him being surprised at being reminded that Barney and Andy were more then just friends. In the first episode of the show Barney called him cousin Andy. Barney and Andy were cousins. Hey it had been along time I am sure some of the fans forgot that little bit of information. He said that he heard at that time that Jim Carrey was doing a remake of " The Incredible Mr. Limpet" and he was going to let them know he wanted a part in the film. Saddly that film remake was never made. Later, he signed autographs and gave everyone a handshake and a big smile. In the 60's Mr. Knotts made some very funny movies. The above photo is from the DVD "How To Frame A Figg." Later he did movies with his friend Tim Conway. Movies like "The Apple Dumpling Gang" "The Apple Dumpling Gang Rides Again" and "The Private Eyes." However, he will always be remember for his television work. Mostly as Barney Fife. Some will remember him as Mr. Furley. Others will remember when he joined the cast of "Matlock" to be with his friend Andy Griffith. Fred Hembeck and I remember his self titled variety show. It wasn't on very long but it was very good. My favorite part was when they acknowledge the Mayberry show by having Don sit on a set designed like a front porch with that weeks guest for a small interview. Of course the one I rember the best is when the guest was Andy.
It is somewhat ironic that both men died on the same day. Both are famous for playing a character that was, in their minds, trapped in an enviorment they wanted to excape. Barney Fife was a small town boy who wanted to make the big time by going from small town cop to a city detective. Carl Kolchak wanted to stop writing for small newspapers and make it back to New York and write for the Times. While Barney did become a detctive Carl still wrote for tabloids. However, both characters functioned at their best in the the enviroment they wanted to escape. Barney didn't do that well as a detective. In one episode he would have lost his job if Andy hadn't helped him solve a big case. Carl could have made it as a reporter at the Times but he would have just been a regular reporter. At that Hollywood Disptach he was the star. Perhaps we should all remember that when we wish for a better life. God put us here for a reason. We need to bloom where we are planted.